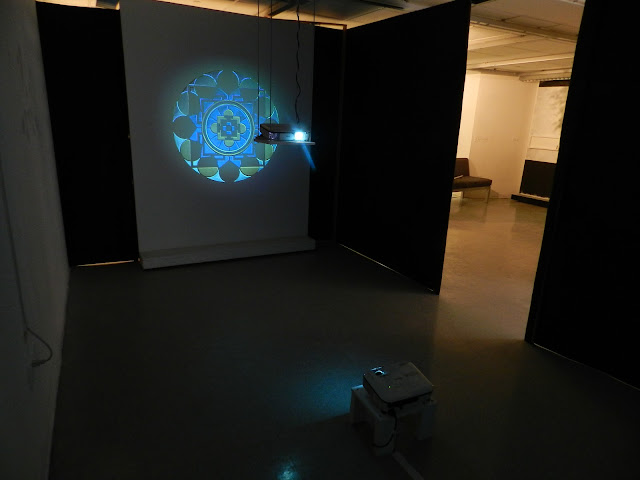 Over the past semester here at Montclair State University, I've been experimenting with optical negation by means of subtractive and additive color mixing; i.e. mixing projected light and painted pigment to get things to look like they're disappearing.  This was the impetus for my latest projection installation Hyalo, which actually turned out to be something quite different! (originally titled Of Unseeing: Hyalo, but changed exactly for these unexpected effects, namely that it was very un-unseen)

I began with this:  I wanted to merge the mandala form I've been using (see my previous posts, and some hence-coming...) with a rose window stained glass form (both of which originate from similar formal and theological concerns, historically).  The term hyalo - my title - is a greek word referring to glass mosaics, or, more specifically, prototypical stained glass windows.  The first projectors to use photographic positive and negative transparencies, created by two french daguerrotypists in 1848, were in fact called hyalotypes, giving a nod to stained glass as the first form of projector.  So I set out to paint a rose window that would be cancelled out by digital projection.  Upon blocking the projector, would reveal the painting underneath with their shadow.

I suppose this all is a continuation of my preoccupation with Heidegger's notion of Aletheia - truth as both revealing and concealing - and this mystically paradoxical idea of negative theology. 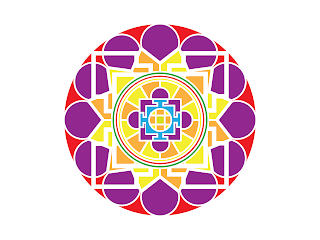 was spliced into to inverse fragments, that would be painted on opposing walls: 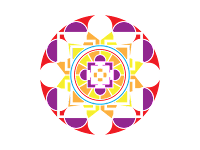 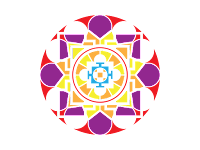 This way, you could never get the whole vision, because your back would always face one component of the whole.  To confound this further, you can only see those pieces by concealing them in the first place.  I designed the following "room" setup, with two opposing projectors, aimed across one another, so that there was virtually no way to enter the room without obstructing one or both of them. 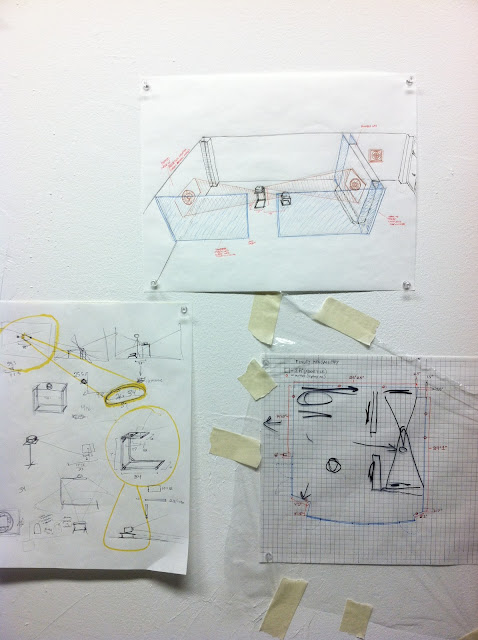 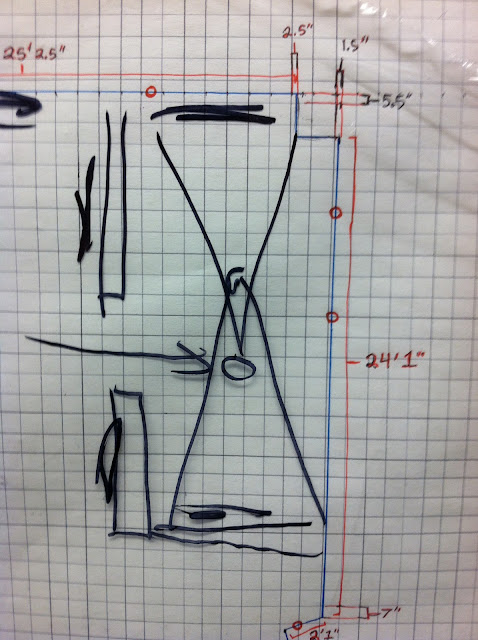 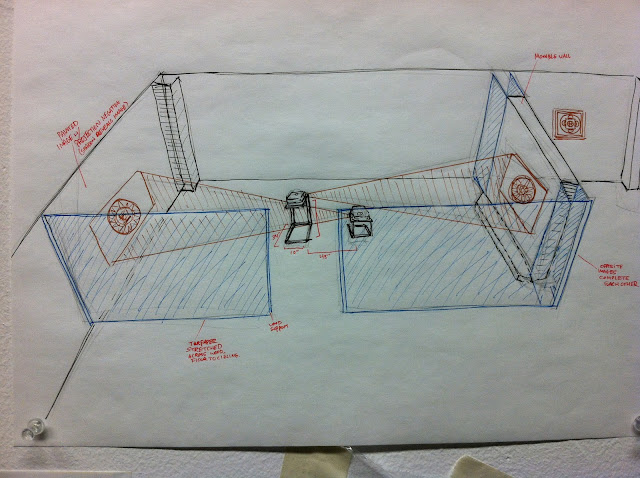 Come time to exhibit, my first task was to build the room itself.  I claim no style points, but given the one day I had to build this thing (and a shortage of movable walls) I'm quite pleased with my ingenuity. 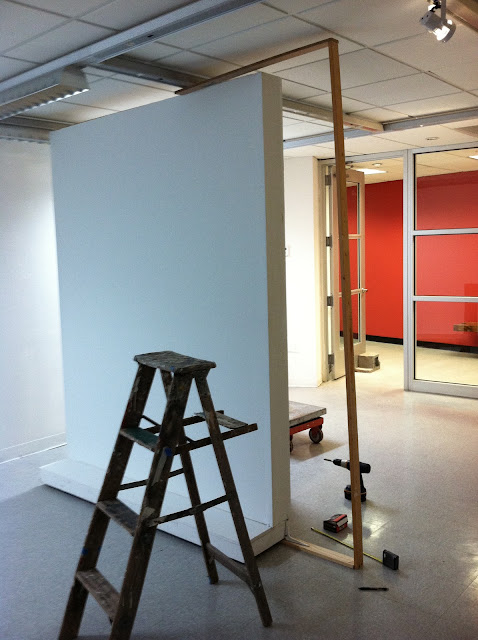 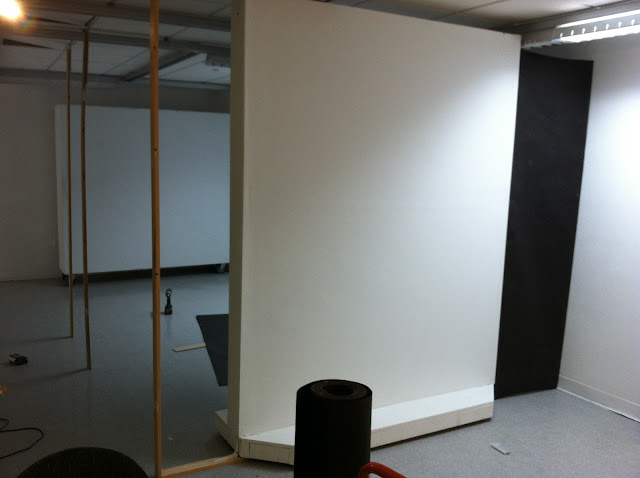 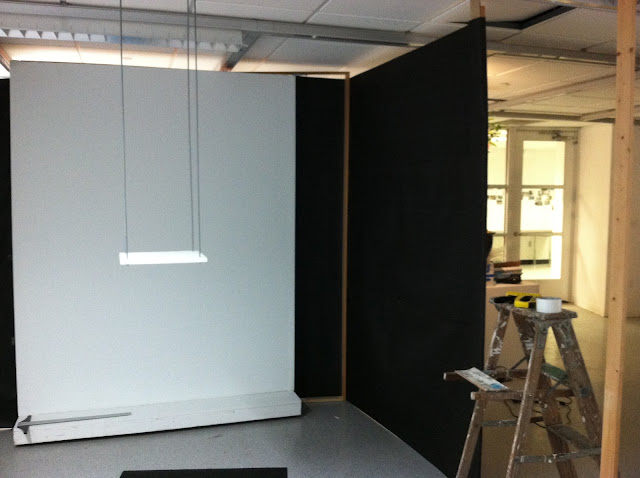 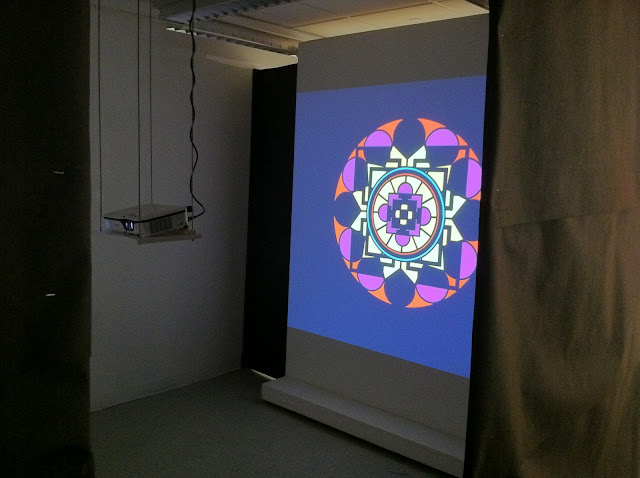 Here's where things got interesting...  The image only really disappeared from the angle you see above (and ONLY that angle).  Once I stood up, I found that the "matte" acrylic paints I used actually reflected quite a bit of the projected light, resulting in an oddly ethereal, luminescent, metallic sheen.  Deciding to embrace this inherently stained glass like effect, the project therefore became something other than what I intended.  Additionally, as far as I can figure, a slight shift in ambient light also changed the colors projected in the final project.  This was the result: 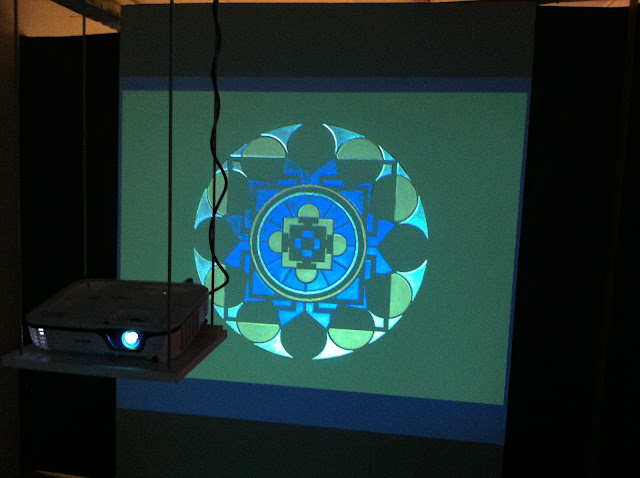 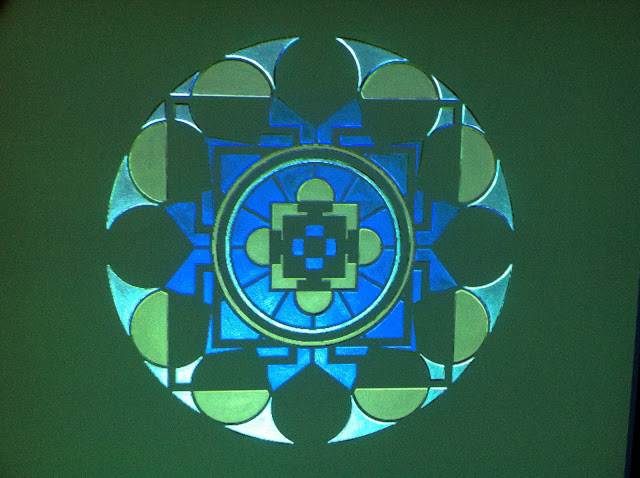 So I decided to play up that original incidental optical effect, masked off the edges, and produced the following!  This is ultimately what was shown in my show with Jeremy Bell, Pneuma (Breath and Soul). 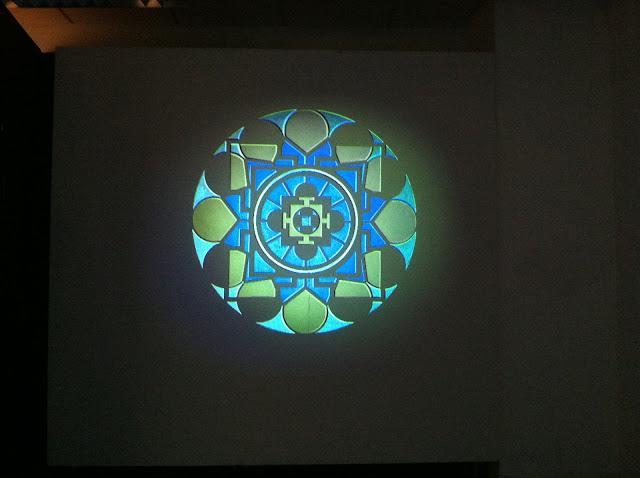 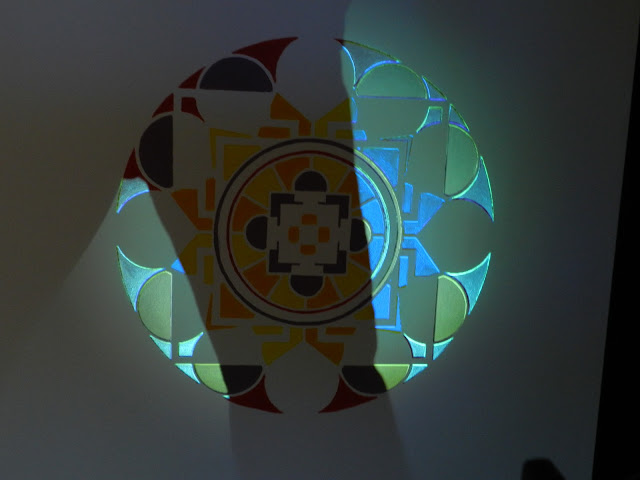 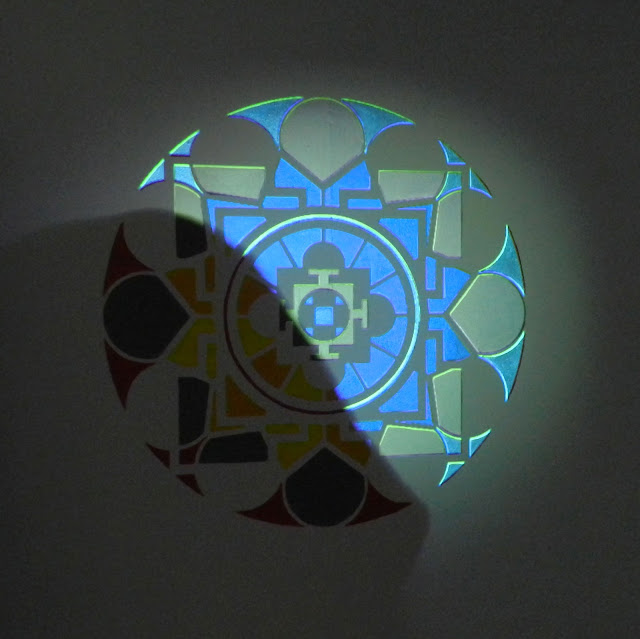 Essentially, this project marks the point of divergence for two subsequent projects.  One in which I continue to try to solve the problem of reflection and get it to disappear, and another in which I continue to play up this new stained glass effect.  I'll be procuring a colorimeter from the photo lab to try to get better readings on the mixture of light and paint, and I'll try other paints as well (note the wall paint is not reflecting the same way)  It will be interesting to see what emerges!
Posted by Eric Valosin at 8:20 PM