When in doubt, work very small

I may be temporarily homeless (as far as studio space goes), but that seems to me to be the perfect excuse to work on some smaller scale drawings! Armed with a folding table and a spare corner of my living room, I broke out some pens and began contemplating (in the Eckhartian sense, of course). 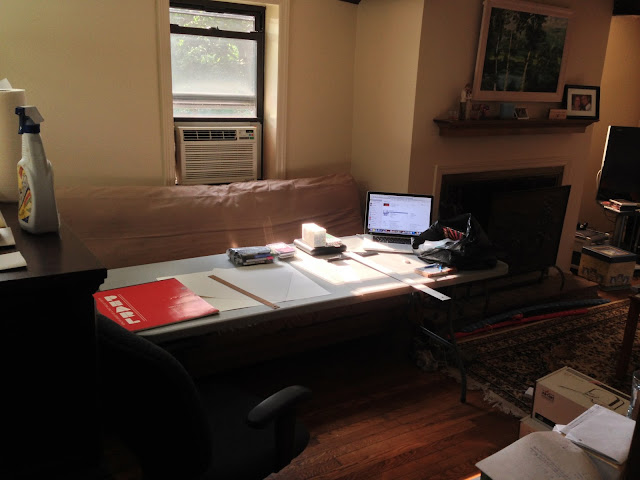 As a part of my Meditations series, I had wanted to make a mandala that was itself entirely a QR code for a while now. So that's exactly what I'm doing. I'm continuing to work with the randomizing QR code from Meditation 1.1. As our beloved critic in residence Matthew Nichols suggested, "if you find it to really be the most successful solution at the moment, there's nothing wrong with sticking with it." Perhaps I'm still married to the traditional formats a bit more than I would like - still keeping one hand tentatively on the wall of the pool while I test with my big toe just where the drop off to the deep end starts - but as I proceed on with the series I'm contented by this current challenge. Besides, the deep end is full of other endeavors, like my ongoing Circle or Cosmos on Gray projects.

I enjoy getting sucked in to the detail - to meticulously fitting the nib of the .005 micron pen ever so delicately into the corner of what will be a lavish QR pixel - and I think often of my distant Tibetan colleagues (who probably wouldn't name our relationship as such, even if they did know I exist). 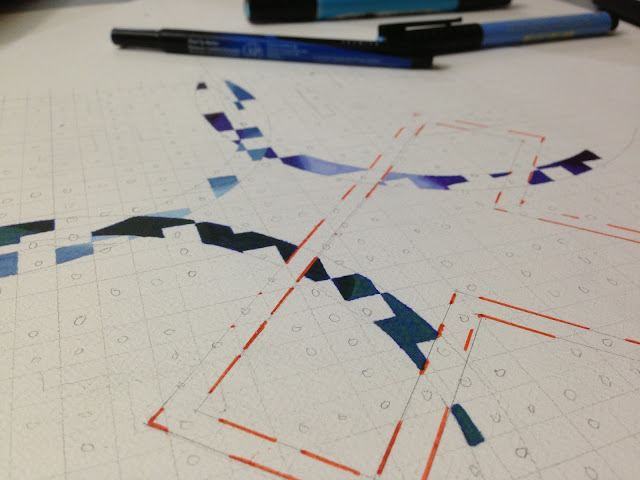 After carefully gridding out the QR code, I began laying out the design, which would borrow from Meditation 1.2's intersecting mandala forms. My aim is to de-center and heteromorphize this code, while maintaining the balance and visual allure of traditional, radially symmetrical mandalas. 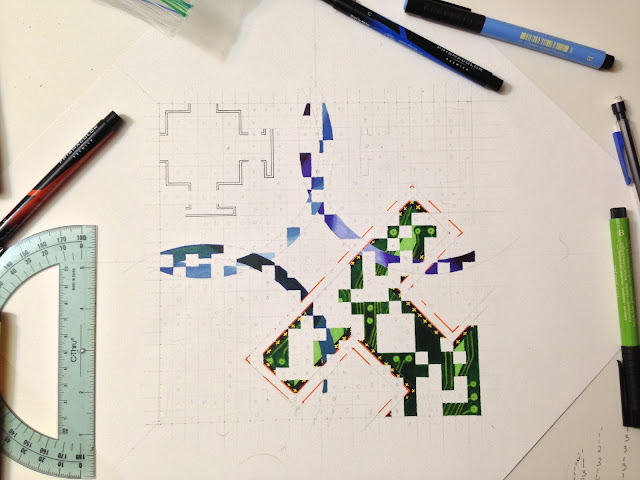 As you can see, I'm also merging digital and analogue symbolism and imagery.

Holding true to the naming system I've developed for this series, this one will be called Meditation 2.1 ([something to be determined]; Omnipresent).  Contrary to conventional software version numbering systems, the numbers are not sequential but rather representational. The numbers correspond with the parenthetical name, which describes the format and function of the piece.

The "2." in "2.1" refers to the overall format. The first one, "1." was "thusness, elseness," referring to the the Yamantaka or "thusness" mandala form that I then pushed away from the notion of being thusly anything at all concrete (therefore not only "thus," but "else," or "elseness"). So "2" will be the QR code as the meditative image itself. I'm still thinking of the correlating name (the first part of the parenthetical name). The ".1" in 2.1, as it did in 1.1, is the "omnipresent" part of the name, describing the function or destination of the code, in this case choosing a randomized website and therefore sending you to any/all cyber-locations.

Someone recently asked if I use a magnifying glass for the finest detail, or if I prefer just going crazy, but I really feel a lot saner when I'm present in the contemplative moment of a small detail. Maybe it helps supplement the reality of the larger details that I more often focus on, like the fact that I'm working in the corner of my living room...