The last couple weeks have presented a HUGE wealth of new knowledge and small victories I was totally not prepared for. I've made quite a bit more progress on my Pushbutton Prayer Bead project (follow the link to see how this all started), notably designing a prototype for the bead itself, expanding the circuitry to involve more than a single LED, and tackling the electrical practicalities that I wasn't even aware would be such a challenge.

Wary of the immense learning curve of designing in Blender, I decided to go with SketchUp to design my bead models, which I had much more experience with. Essentially the model needed 4 things:
And it had to be small. We're talking less than a 2 cm diameter. So I took to designing, with a big help from the Solid Inspector plugin and NetFabb software to make it manifest and watertight, ready for printing at Shapeways. (See here for a post that will save your life if you're attempting to 3D print from SketchUp)

I then went back in and made some adjustments to the original model for round 2, and I'm excited to send it off and see how it works!

The next big task came with the arrival of this glorious bunch of 200 common anode RGB LEDs! 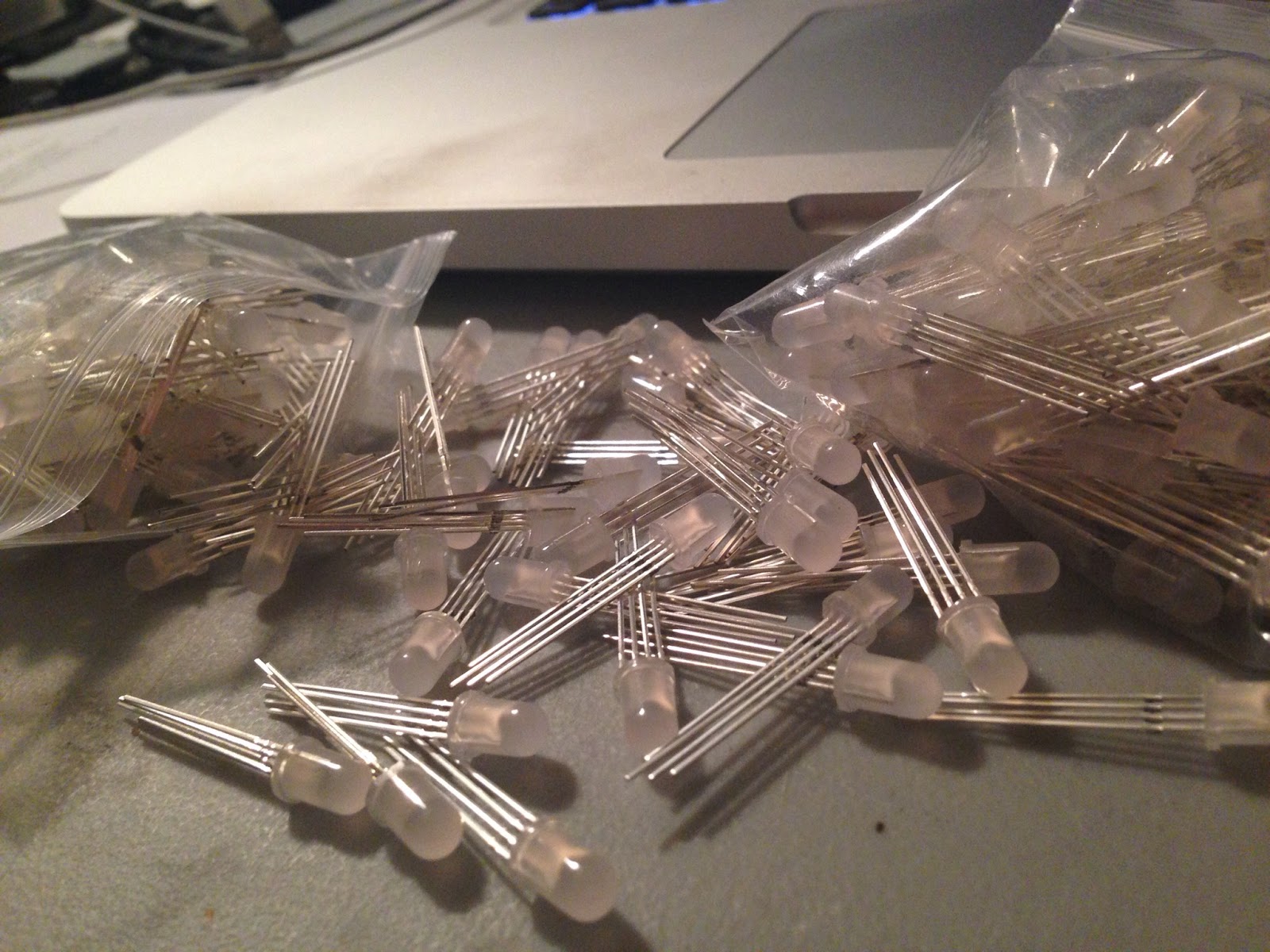 I naively dove in and started hooking up some of the LEDs, only to learn that I had been prototyping with the common cathode type before, not common anode. When I started it up, first it did nothing at all. Then, after rewiring it was on when it was supposed to be off, and all the colors were the exact complement of what they were supposed to be! Lets just say I've spent a LOT of time surfing electronics forums this week. Luckily it was as simple as connecting the common pin to the power source rather than ground, and inverting all the Pulse Width Modulation (PWM) values that would tell it what color to be. No sweat. 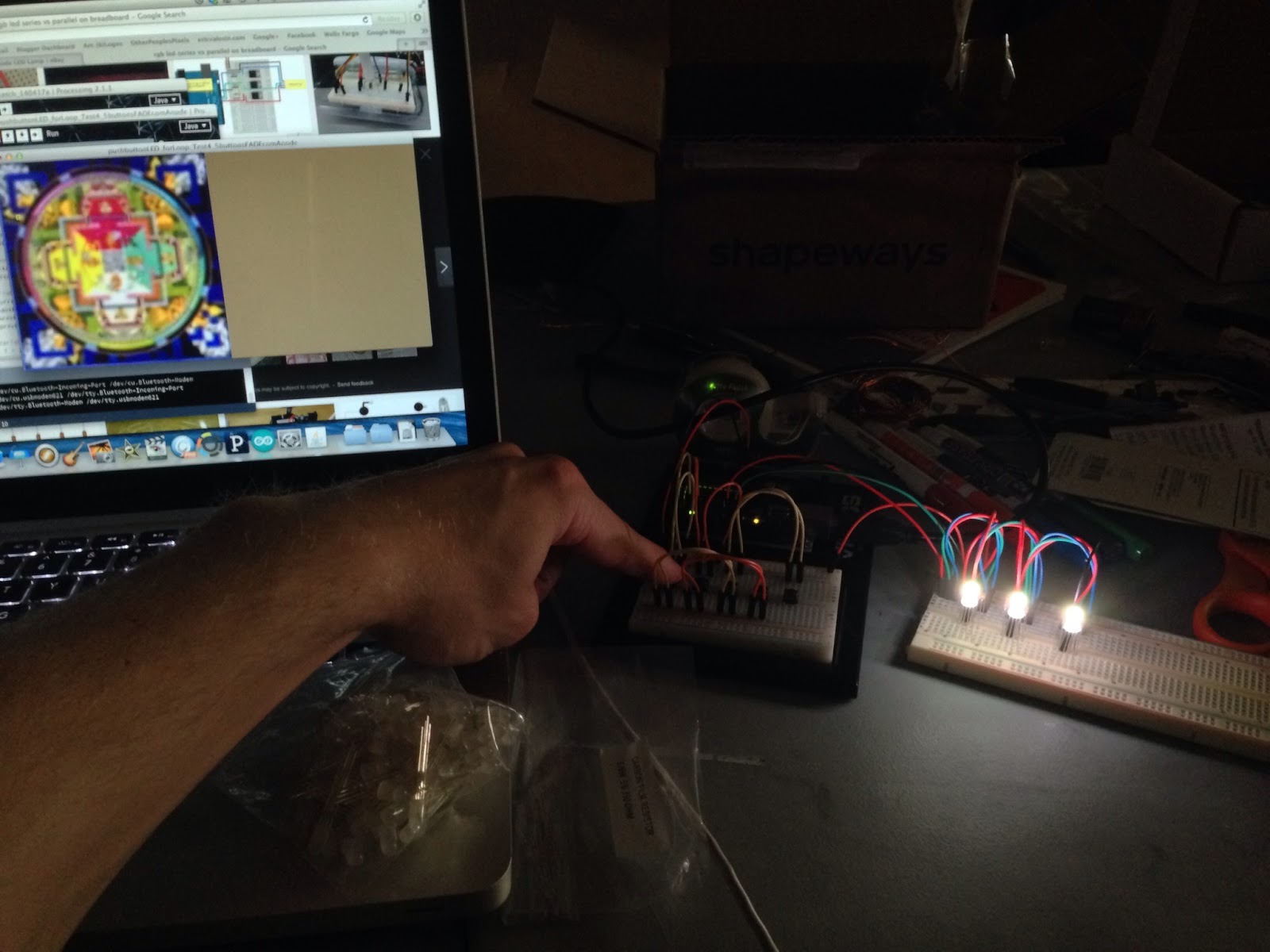 Once I got my LED color fade working properly, I decided to start looking into what it was going to take to string up 200 of these things in parallel. Apparently all my extensive training in abstract conceptual theory has utterly destroyed my capacity for concrete thought, as my eyes glazed over at Ohm's Law (which I knew readily in High School), and I became someone I would have made fun of in physics class. The numbers and formulas all looked like Greek to me (to my credit, actually, some of it was in fact in Greek - ahem Ω) I totally got it in theory...

Tempted to just say "screw it" and fudge the numbers, I finally cleared my bleary eyes and buckled down to learn the very basic tenants of electrical engineering needed to see what I was up against. And its a good thing I did! After calculating resistances and amperages at different voltages, and poring through data sheet after data sheet (I'm talking 7 hours of research - I'm talking really starting from scratch here), it became clear to me that the setup shown above was one full-white pixel away from destroying my Arduino's digital output pin! The only reason it didn't was because the blend of colors was not drawing the full current it could potentially have if the LED were fully lit.

Not only that, but if I proceeded with more LEDs and my original plan, I would have blown out the +5V and Vin pins, melted my AC adaptor wall wart and fried every LED I had just purchased!
(I will post my most basic vital discoveries and disambiguations here) 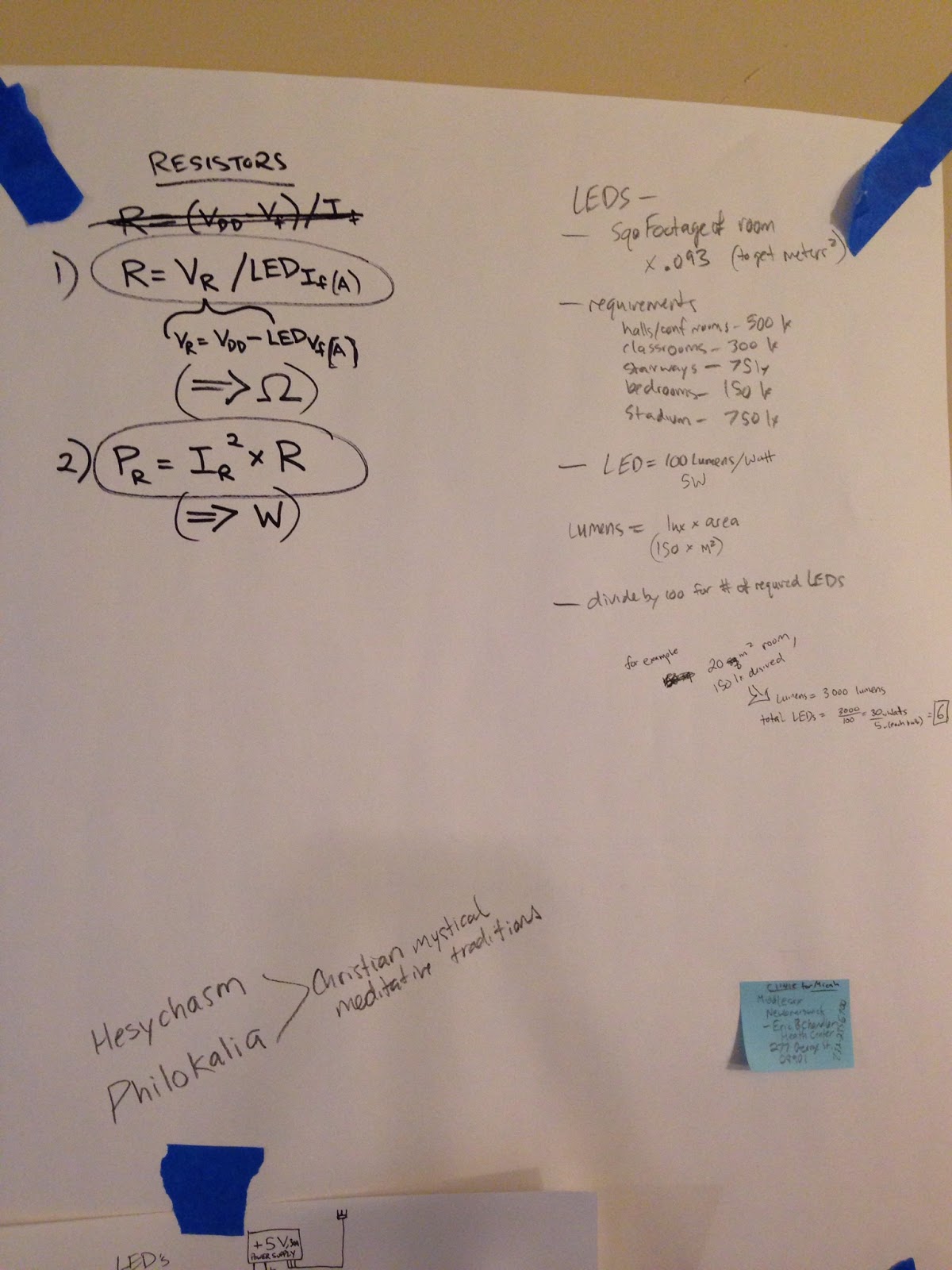 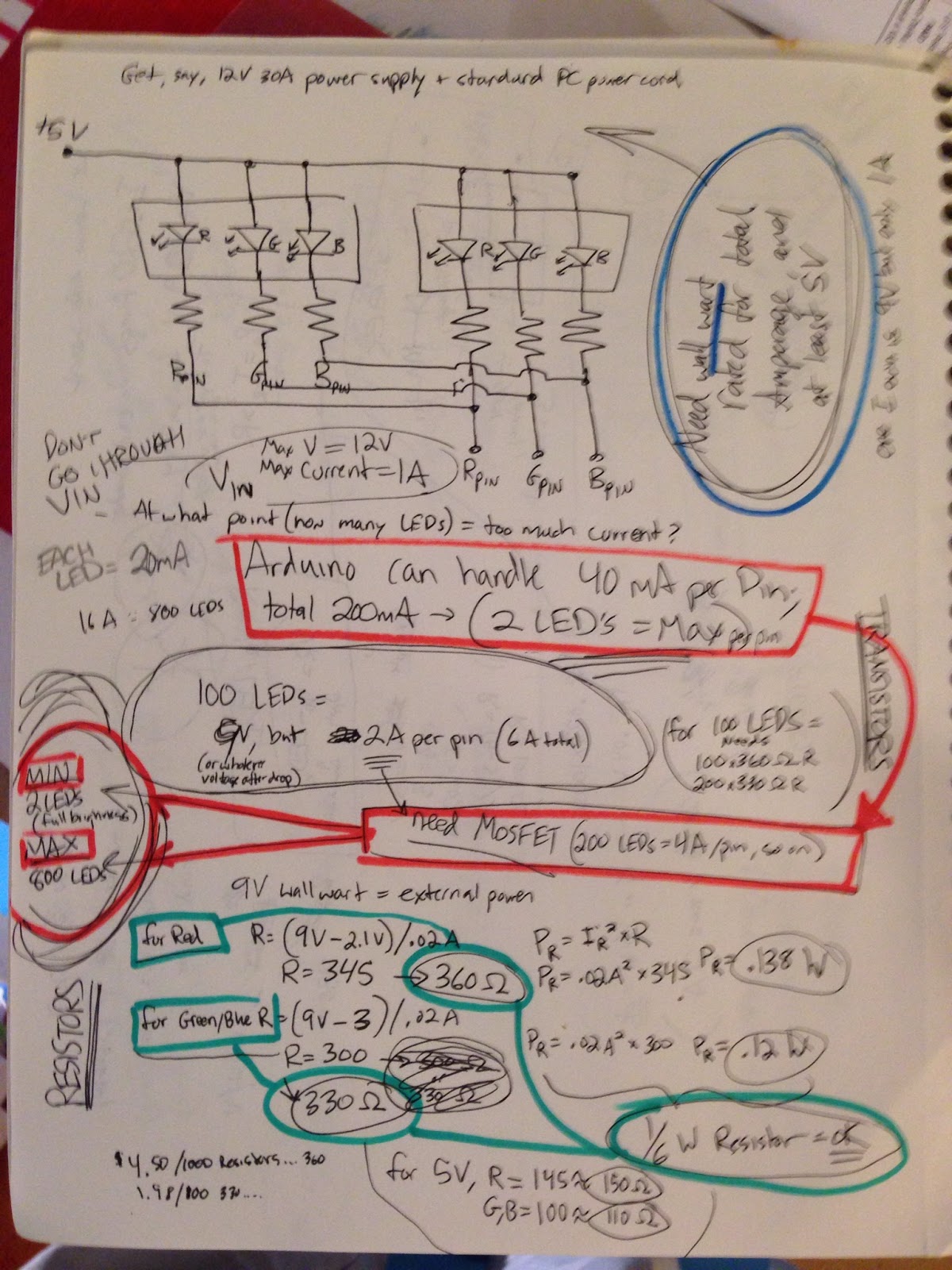 I started seeking other options, and soon added to my shopping list a +5V 30A external power supply and 3 n-channel MOSFET transistors (to protect the Aduino input pins from that high current and drive the LEDs). The MOSFETs arrived in a matter of days, and I began cautiously proceeding with 4 LEDs, wired and protected the proper way. 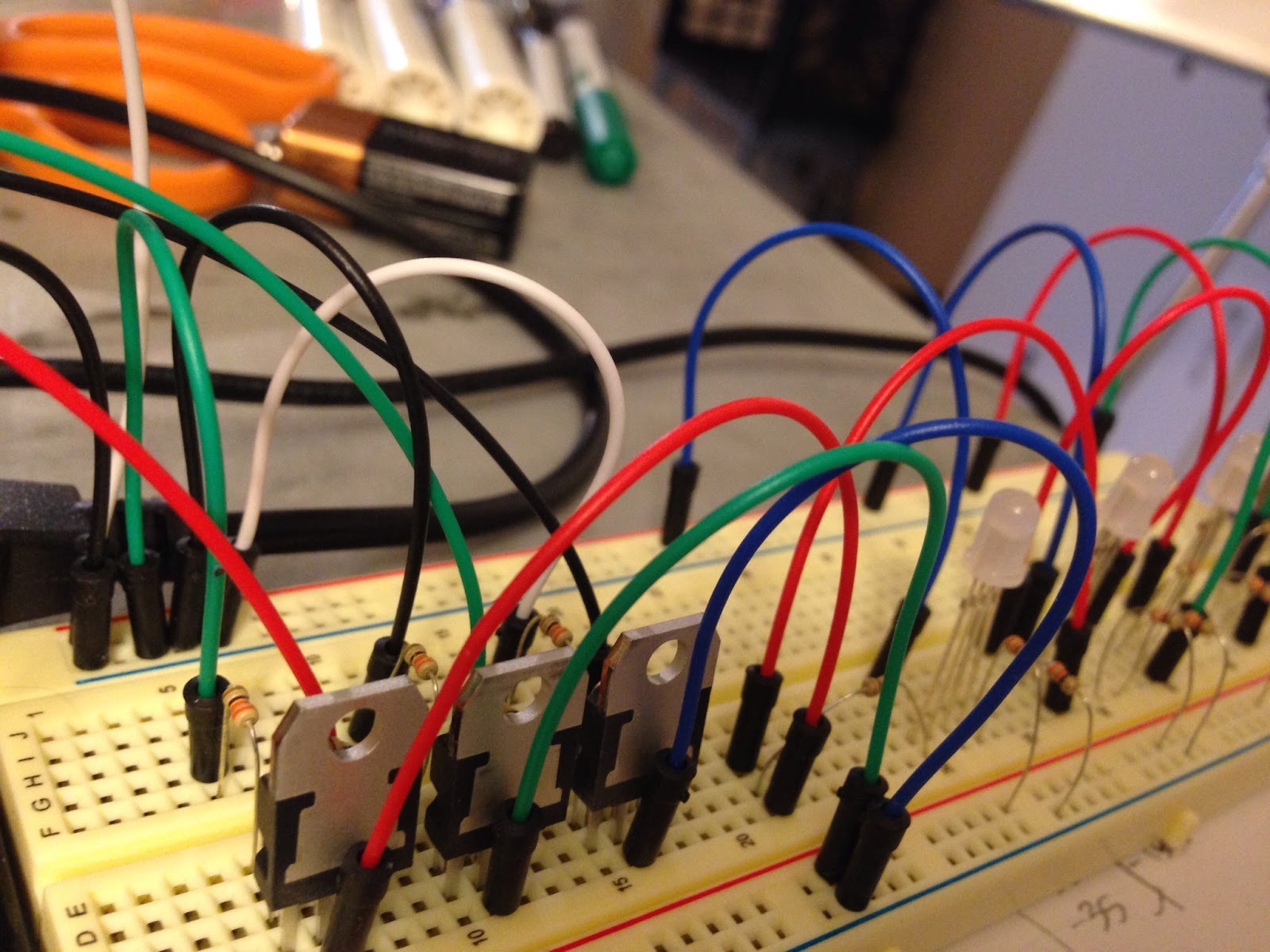 Oddly enough, the MOSFETs seem to invert the voltage coming through the gate, so that whole on-when-it-was-supposed-to-be-off LED problem ended up correcting itself (which still has me a bit puzzled, but I'm not going to argue with simpler code). 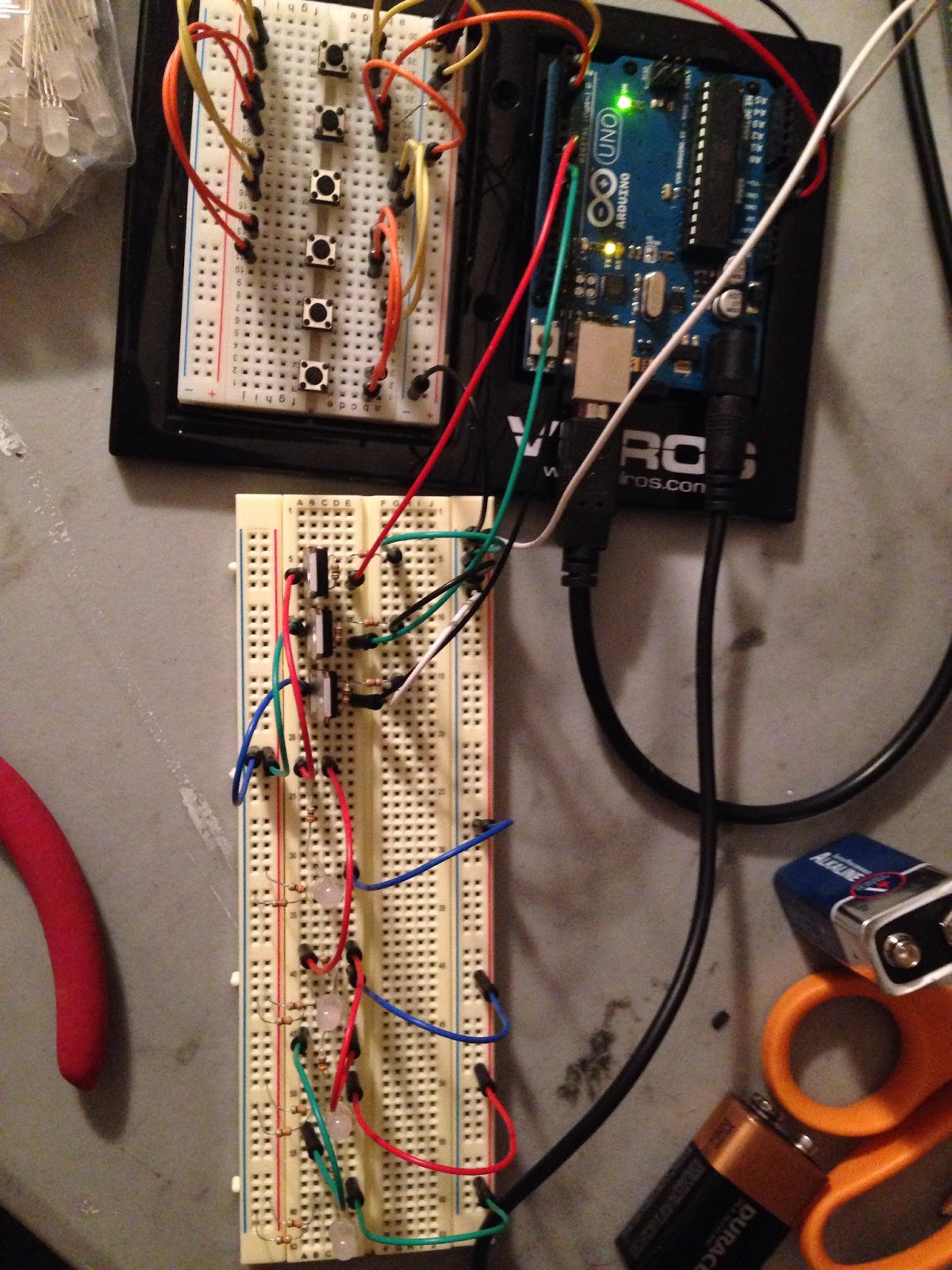 The first of the remaining challenges is of course cost. The bigger this scales up to be, the more I need to seek funding of some sort. Besides that, I am beginning to consider installation layouts and locations.

Before I can get to that though, The code and the hardware still need quite a bit:
Definitely fun stuff!