Meaning in Meaninglessness - A Mystical Reading of Ecc 1:2

Everything is meaningless. The good news is, that means everything's ok. Really, the true spoiler is that through a bit of exegetical contortion we see that this famous passage from Ecclesiastes actually forshadows the whole story and redemptive turn of Ecclesiastes. Put simply the Teacher could have saved himself the trouble of writing so much of the rest of the book if he shared the full weight of the words he so carefully chose.

Ecclesiastes seemed like the right book to begin a series of mystical readings of the Bible. It is rife with paradox and counterintuitive proclamations, and seems to say so much without really saying much of anything; a perfect Mystical Text! The JPS Bible Commentary's volume on Ecclesiastes by Michael V. Fox also names Ecclesiastes as "the closest the Bible comes to Philosophy, which is the intellectual, rational contemplation of fundamental human issues, with no recourse to revelation or conventional tradition" (xi). There's something charming in that to me because despite it's isolating honesty it somehow still ends up canonized, becoming conventional tradition, and being a source of revelation to millions.

Tape up your ankles ladies and gentleman - we're about to launch into a routine of etymological, hermeneutical, exegetical, linguistic gymnastics the likes of which would break both ankles of the best olympians (...a little 1996 Kerri Strug joke...). Let's begin. Koholeth, translated "the Teacher," pronounces,

Everything Is Meaningless (Ecc. 1:2)

We know this is a roughly bastardized translation, as even the best Biblical texts often are. Often we may have heard this passage more literally translated as Everything is Vanity, preceded by the phrase vanity of vanities in place of the more common utterly meaningless. What they don't tell you is HOW they arrived at "Vanity," and what that really does to our reading of the word "Meaningless"

So I turned to the original Hebrew, transliterated as:

The first part is easy: Ha = The,  and Kol = all/the whole of it.  The next word is where things get interesting. Hebel directly translates to Vapor or Breath. So how did we get "vanity" from that? Well, conjugated as a verb, Habal means to act as vapor. This gives us the idea of the empty, substanceless actions we'd call "vain." So "Vanity" in this case means "acting as vapor," and thus "Meaningless" takes on a meaning of "having no substance; being close to nothing."

So, in a strikingly apophatic turn of events, we can reinterpret the passage:

The whole of it [is] substanceless/nothingness

So What? Let's Ask Cain and Abel

So we've reconstructed a literal interpretation of 1:2, but how should we feel about this? Is this really as bleak a proposition as it seems? I think not...

Interestingly enough, Hebel happens to be the exact word given as a name to Adam and Eve's second child, which we have come to Anglicize as Abel. Abel is thus named "Breath" or "Vapor," or essentially as we discovered, he's named "Nothing." One source illustrates it quite poetically saying,

The names of important characters in Genesis are usually explained while they are given, but not Abel. Here is an individual who is named Whiff, who is not even worthy of an name-explanation, and who has himself done in by his brother Cain, before he can even say a word! If God hadn't accepted his offering (Genesis 4:4) and Jesus hadn't proclaimed him righteous (Matthew 23:35) Abel would make for a very sad character.

And what of Cain? His name takes us for quite an etymological romp. Cain (or Kain) is usually translated as "reed" or "spear." This is usually where the interpretation stops; makes sense, right? The one named "Spear" kills the one named "Nothing." However, as a verb, the word has come to mean to gather or acquire. Yet, most literally it means to forge (a spear perhaps - and to forge spears is to create and thus acquire or gather them).

Take it a step further, and combining the roots (to gather and reed/spear) gives us the word for to build a nest (As in "to gather reeds"). So then:

"That which Gathers" kills "Nothingness"

A new take on the notion, but it seems intuitive enough... you can't have nothingness where something is gathered, right? So again, I ask the qualitative question, how should I feel about this? Our culture tends not to value nothingness. Am I to pray for a nest, that I may avoid oblivion?

Interestingly, whereas we would idiomatically say something like "he's wailing like a banshee," the Hebrews might say something like "he's crying like an eagle building a nest!" You guessed it, the word for "cry" in this case is Kenite, to lament, from the root Kain, an eagle "gathering reeds!" Onomatopoetically, this is where they get the word we translate as "lamentation!"

So am I to pray for the ability to Gather? It seems not, for to gather is, connotatively, a lamentable thing! Cain is given a name that carries a poetically negative connotation, fitting of the vilification he'd endure.

And remember from the quote above, that Abel would be nothing save for his exaltation by God in Gen 4:4 and Matthew 23:35. God accepts his offering in Genesis instead of Cain's, saying he will be "elevated" (Hebrew Nasa: to be lifted up; accepted; to have honor; to lift one's countenance with confidence) for his right actions.

So it seem Cain may have triumphed over Abel, but Abel is the favored one and Cain is despised. To gather is lamentable, but to be as nothing will earn you the favor of God!

According to this, I should pray to be like Abel, maintaining my nothingness, and resisting death by way of the gathering!

Where Does This Leave Us?

The whole of it [is] substanceless/nothingness

This is not a lamentable thing. In fact, that the whole of it is meaningless is indeed to have the favor of God, and to be seen as righteous. Qualitatively, we can substitute "Meaningless" with "Righteous by way of its emptiness."

Should my prayer therefore be, "God, make me nothing, that I may be righteous?" Sounds surprisingly orthodox, really. After all, won't the last be first and the meek be blessed (Matt. 20:16, 5:5)? Indeed, but let us not forget the first part of Ecc 1:2. Remember that easy part in the beginning? Ha-Kol. The whole of it. I need not pray to be meaningless because the whole of it already IS meaningless!

Everything is already as it should be, Favored and Righteous, by way of it's Nothingness

Everything is already in a favored, redemptive state. We need to just accept it. And isn't that in the end what the Teacher, Koholeth, discovers in Ecclesiastes? That we must be content to live in the moment as it is, working for the sake of the work, and remembering and reconnecting with the One who created us from dust, that we may return to dust. Everything is as it is, just as it is supposed to be. We need only to accept it.

This rings of the a-teleology of Zen or the emptiness of Eckhart's Christian mysticism. But really, it sounds very simply like Grace to me. We are already redeemed, forgiven, accepted, and made righteous. We need gather nothing, rather we must remain nothing - empty, dying to ourselves so that the Breath of God (Pneuma of God? Rather, Hebel of God...) may abide in us. We need only accept it as it is, just as we are accepted as we are. We are in fact given our most precious meaning in our meaninglessness.

And there you have it, the whole of Ecclesiastes (and more) couched into the very linguistic structure of the very first pronouncement of Koholeth. It may seem an unnecessarily radical exegesis, but I for one think he knew what he was doing in choosing the precise language he did. After all it says, "the Teacher searched to find just the right words, and what he wrote was upright and true" (Ecc. 12:10).

But don't take my interpretation as gospel, for we are also told that the Teacher has given his words, and to "be warned, my son, of anything in addition to them. Of making many books there is no end, and much study wearies the body" (Ecc. 12:12).

So in the end, even this blog post is Meaningless. 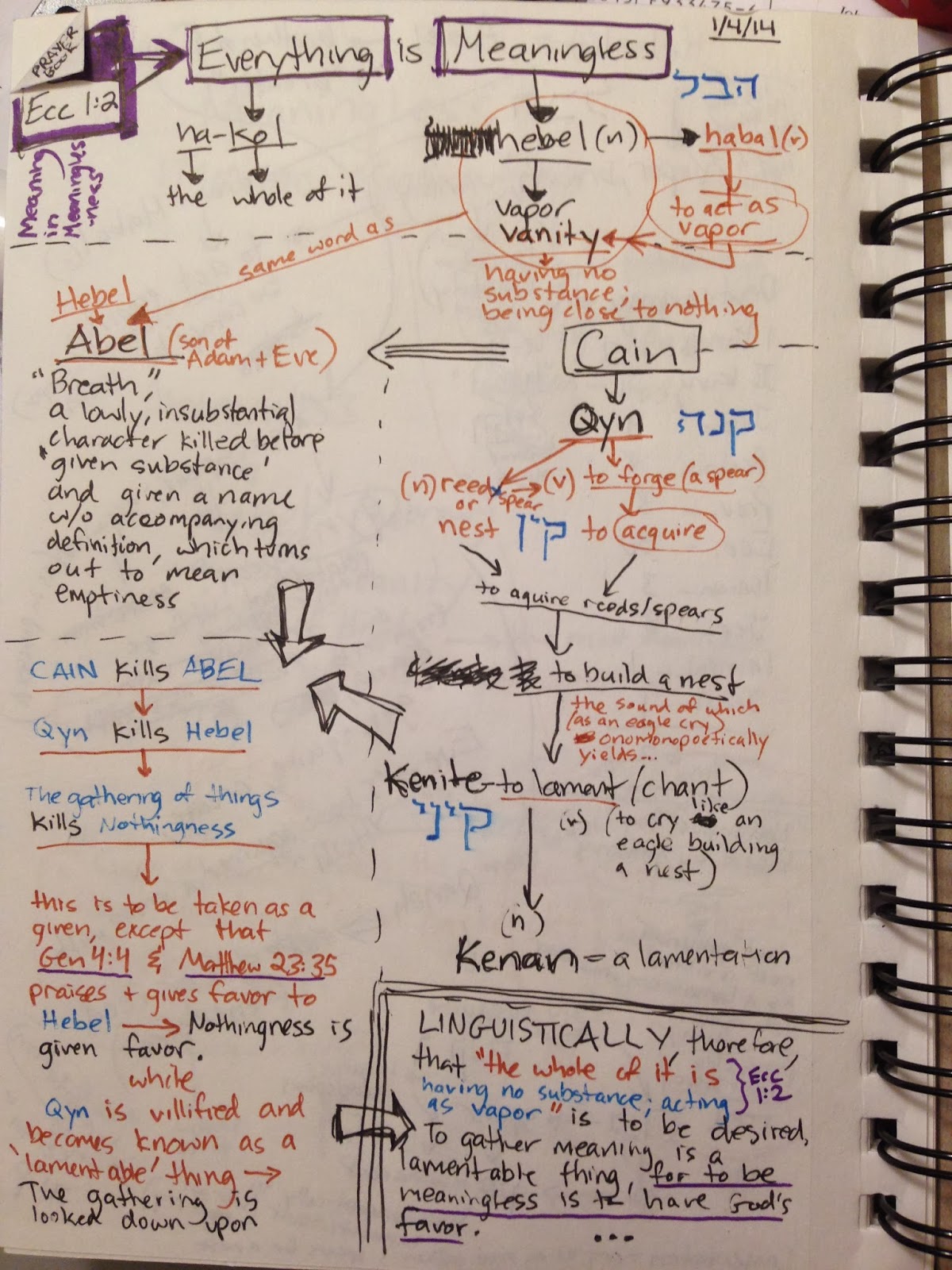 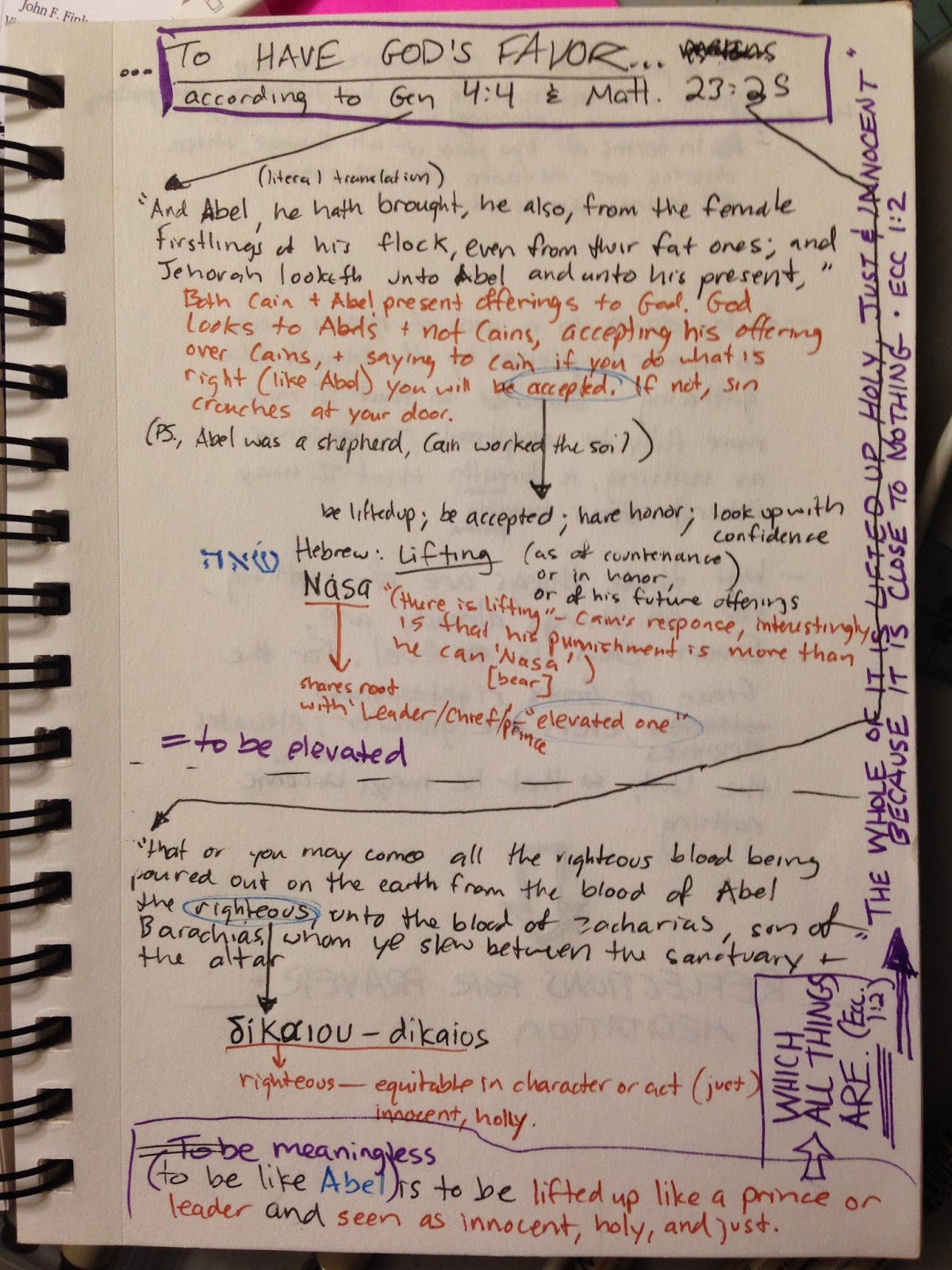