The Threefold Fourfold, in Twofold Fivefold

After a site visit and some major collaborative effort with Christine Soccio and John Spano, the three of us began devising individual projects that would feed off of the Fourfold exhibition's collaborative spirit. Our task was to imagine that each other's practices were our own, creating a conceptual mashup of the three of our practices, as funneled through our own unique set of tools or media.

I decided to do this with a couple of QR mandala drawings, as well as a new projection negation installation.

The entranceway of the gallery provided a perfect opportunity for such an installation since it was a liminal space that would force viewers to unwittingly engage with the piece as they walk past it to enter the space, blocking the projector and revealing the negated imagery in their shadow. 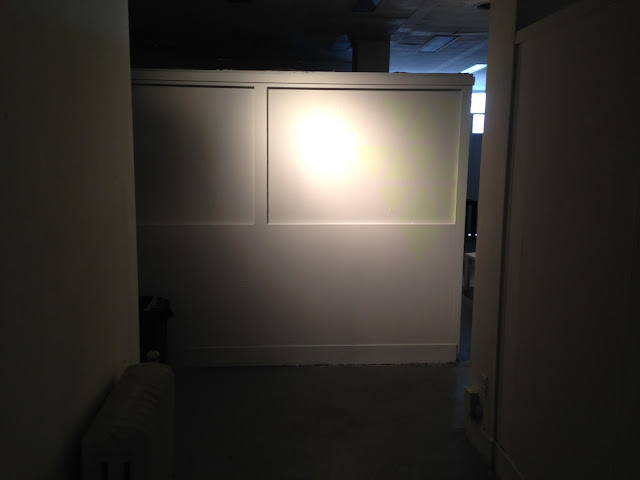 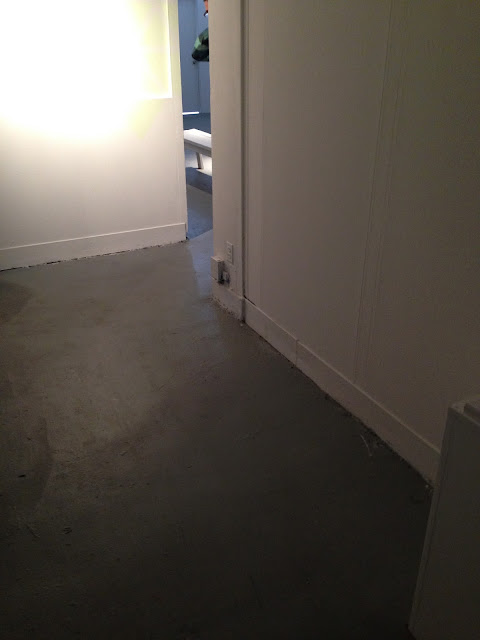 I decided the imagery would consist of a stained glass window made up of the Penrose tile pattern and Ammann grid from Christine's practice, featuring a hazmat suited "saint" of sorts out of John's practice. 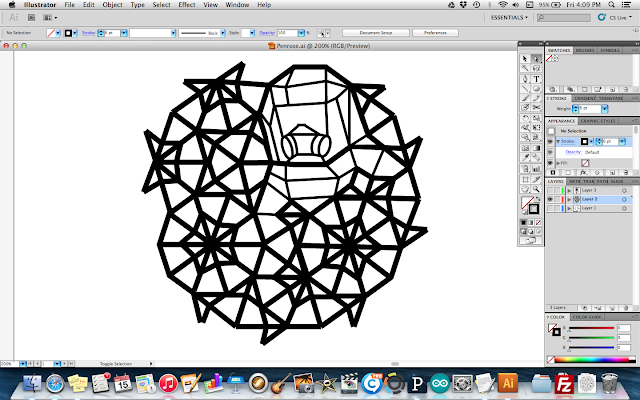 I had originally mulled around ideas of making the whole thing digitally interactive as well, incorporating live video feed. I even went as far as to code some experiments:

But ultimately I decided to forgo it for a more streamlined effect. Too much new media is not necessarily a good thing, and there would already be a lot of potentially confusing technology in this show. So instead, I horizontally doubled my original design to better fit the space and end up with bilateral symmetry, the left side using the Ammann Grid pattern and the right side using the Penrose Tile pattern (which geometrically emerge from each other when doing the nitty gritty tessellations of the patterns)

With that settled, I set up my pedestal, projector, and computer, and started going at it: 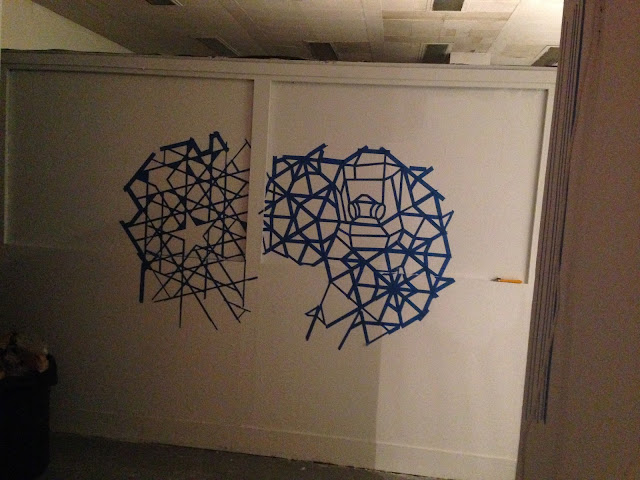 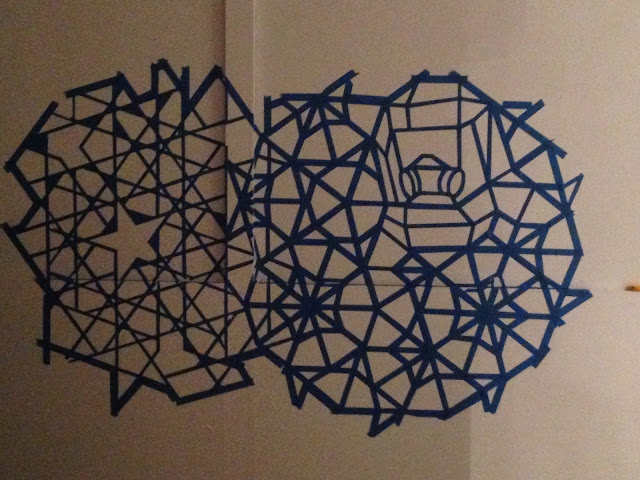 5 hours of painter's tape later, I was ready to begin painting, step three.

And at long last, I'm ready to calibrate the projected colors to begin the negation process. This of course necessitates stabile ambient lighting, and my collaborators were very gracious in getting their lighting set even before all the work was hung so that I could get started on this.


And this is the result: 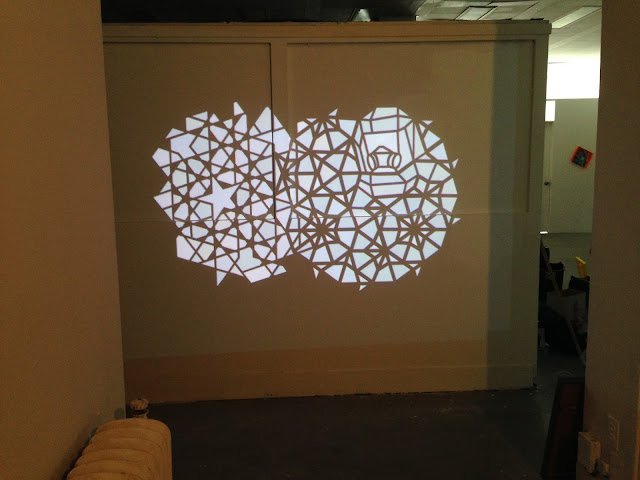 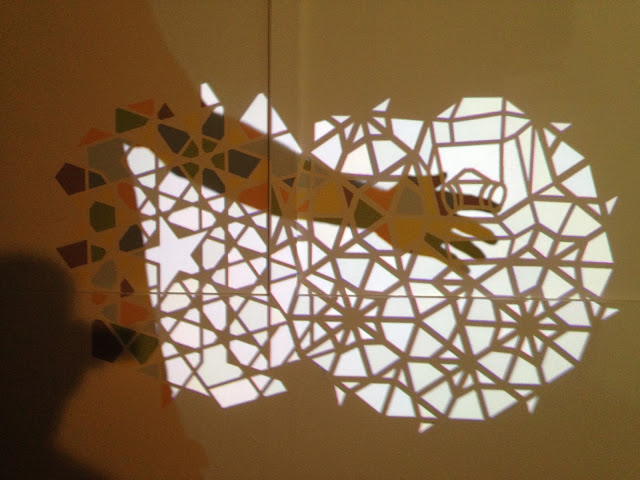 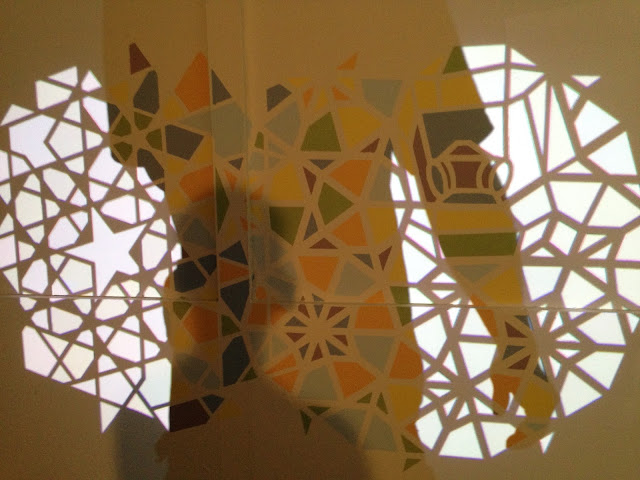 And thus we have it, a three way collaboration on the concept of the Fourfold, in bilateral symmetry encompassing fivefold symmetrical patterns. Or in other words... the Threefold Fourfold, in Twofold Fivefold!


For a look at the other projects in the Fourfold exhibition, check out my other posts linked below.

A Directory of other posts about this project:

The Threefold Fourfold, In Twofold Fivefold - Behind the scenes of my fourfold projection negation project (You are Here)