It's been an eventful last few weeks with the semester finishing up.  I left off on my QR code mandala series (as seen here and at the end of this post) with the completion of Meditation 1.1 (Thusness, Elseness; Omnipresent), which to my delight will be traversing the atlantic for a works on paper show at Cardiff School of Art and Design in Whales in late January! 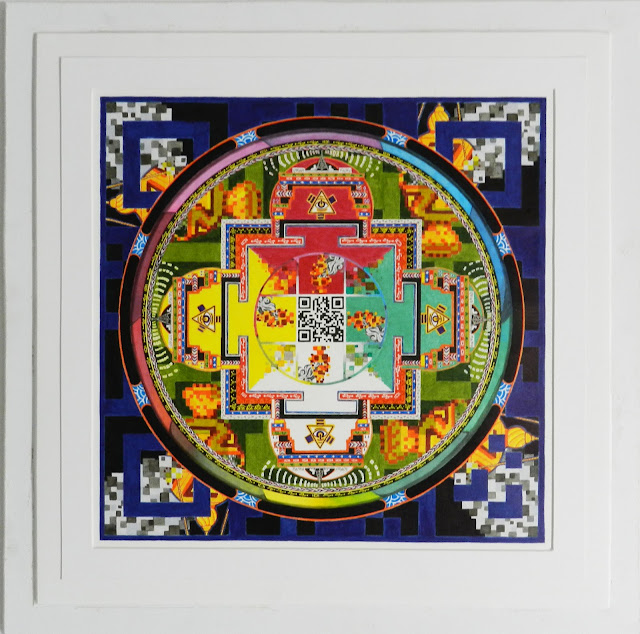 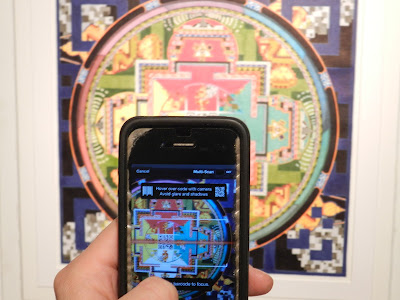 In continuing this series, I decided to move on to Meditation 1.2 (Thusness, Elseness; Intertwined).  By the way, I've created a naming system that adopts a digital numbering system that correlates with both the mandala format and the QR code function.  So 1.1 refers to the first mandala format I used (Yamantaka, or cosmological arguement) and the first QR function (random destination).  This is reiterated parenthetically with "thusness, elseness" referring to the paradoxical cosmology of thingness/nothingness I'm building, and "omnipresent" referring to the QR destination as anyplace.

So Meditation 1.2 (Thusness, Elseness; Intertwined) takes the cosmological mandala form, this time stripped down to its most essential elements... 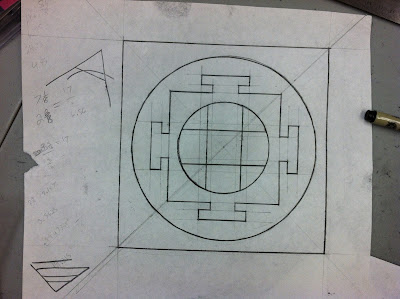 ...with a QR code that refers one piece to another piece.  It therefore manifested as a dyptic of inverses, in part inspired by my Hyalo project.

Considering the Mandala temple structure is essentially a Platonic hierarchy with "truth" at the center, I wondered what might happen when that center is actually created by a number of these mandalas overlapping, each with its own now de-centered center.  so I arrived at this image, consisting of 4 overlapping smaller mandalas encircled by one larger, rotated mandala. 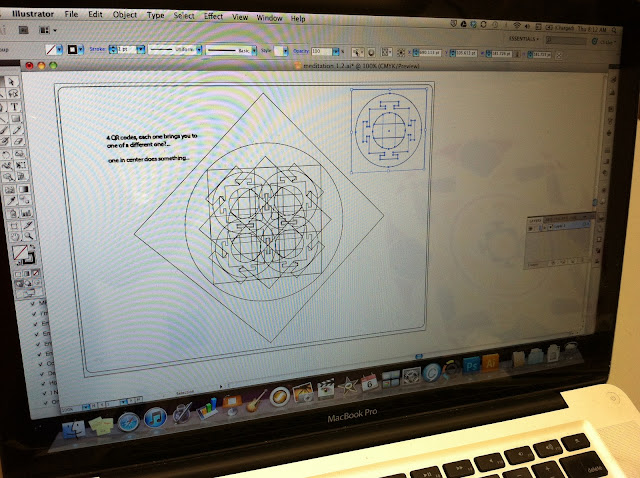 I then decided that the two would be created in exactly opposite processes.  For the first I borrowed some charcoal erasure techniques I created in some of my earlier experimentations.

step 1. The above mandala outline would be traced over top of the paper 4 times, leaving a colorless imprint of the 4 smaller mandalas

step 2. the paper was then blacked out in charcoal, leaving a white trace of the 4 small mandalas where the charcoal doesn't fill the imprinted grooves.

step 3. the final larger mandala was erased out of the charcoal.

step 4. where the lines intersected to create a central square, the QR code was drawn 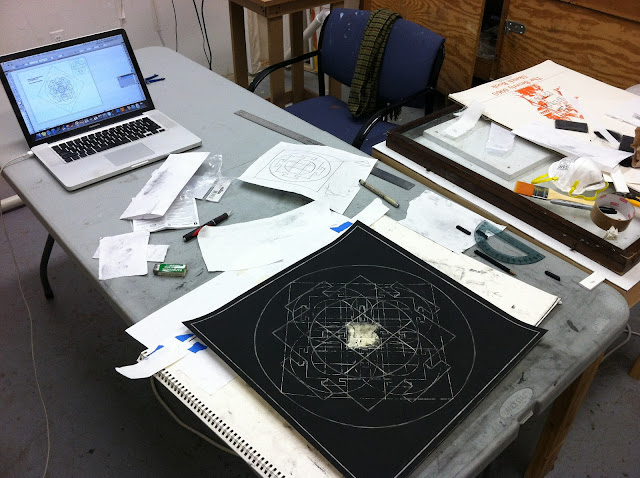 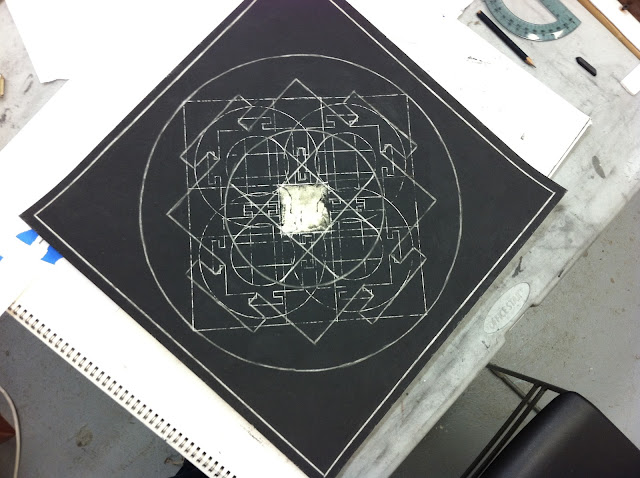 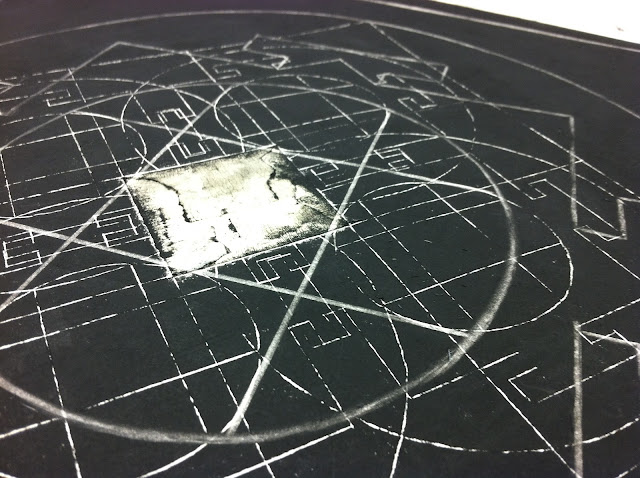 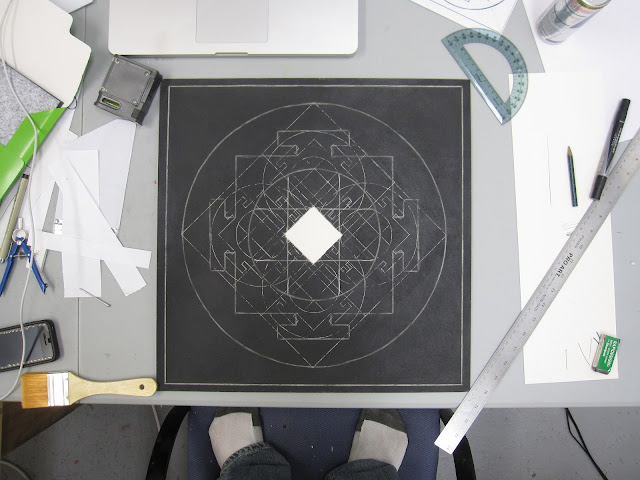 For the second piece:
step 1: using carbon paper, trace the mandala form to graphite transfer it onto the white paper

step 2: leave the paper white (that was the hard step)

step 4: where each of the original center squares land a QR code is drawn 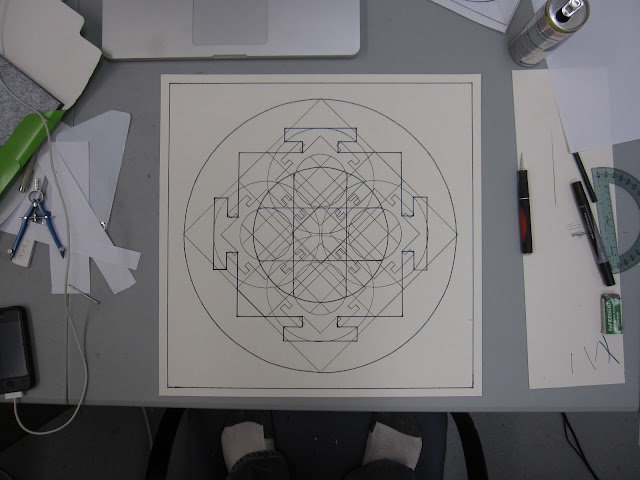 The code from one then takes to to an image of the other, digitally erased and laid onto a neutral gray background. 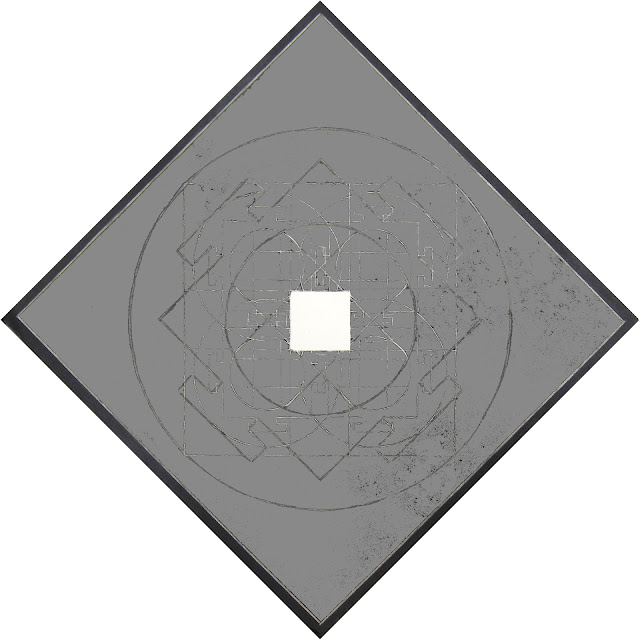 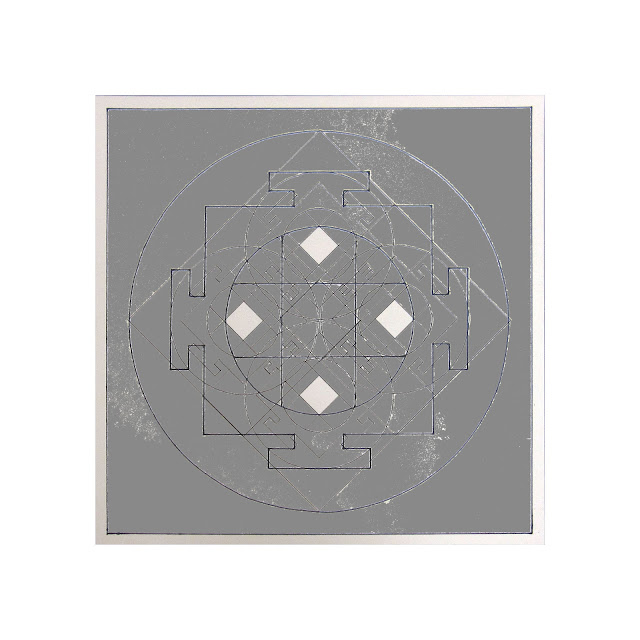 Finally, they were displayed next to each other. 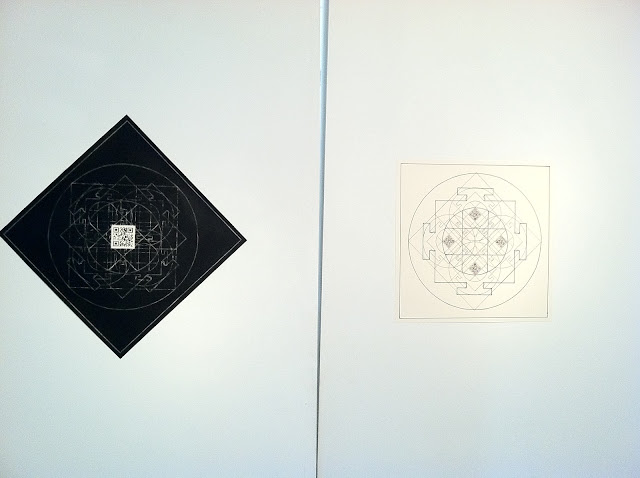 Next I want to try creating a mandala form out of the code itself, before moving on to manipulating the form more, making it less an appropriation and more of my own invention.