After dropping off my piece in Chelsea (see prior post), I was able to grab coffee with new media artist Erik Sanner and light/installation artist Kazue Taguchi, who was in the U.S. for 5 days for a show at Chelsea Piers and staying with Erik while in town.  Erik and I are actually up to some very similar things; he's using a combination of projection and painting to create what he calls "paintings that move," examining the pixelated mediation of our interaction with art in the 21st century.  I had originally been introduced to his work by critic Sarah Schmerler, who recommended him to me in a studio visit.  I ended up including him in a paper I wrote, and so it was fantastic to meet in person and discuss the nature of the concepts and media we shared.  We sipped some java, traded installation anecdotes, squinted at iPhone pics, speed-walked towards subways, and he was generous enough to invite me to the opening of his show at Wave Hill up in the Bronx a couple days later.  It was refreshing getting out into the "real world" and spending time with artists who are truly in love with their craft and simply do it because they get a kick out of it.  It's also nice to know how supportive and interdependent artists tend to be (at least some of them).  Just what the doctor ordered.

Wave Hill is a garden/horticultural center with a gallery space.  The show Tending Toward the Untamed asked the artist involved to create work that responded to the garden in some way.  Erik's first piece involved spliced, pixelated, randomized video taken of the garden throughout several seasons projected onto a painting of the garden.  The other had video of the process of creating the painting projected onto the finished painting.  Take a look! 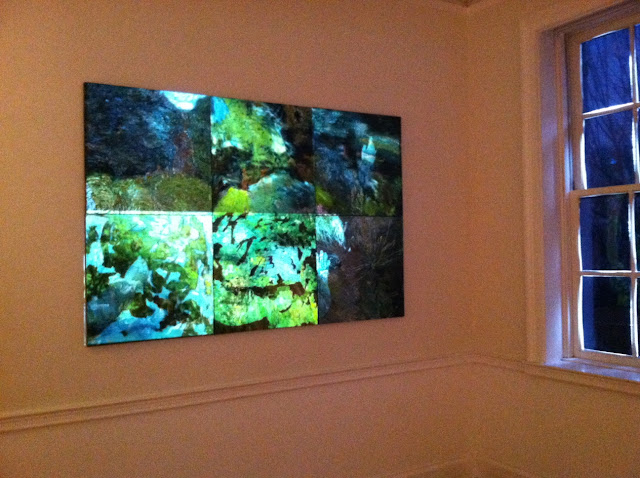 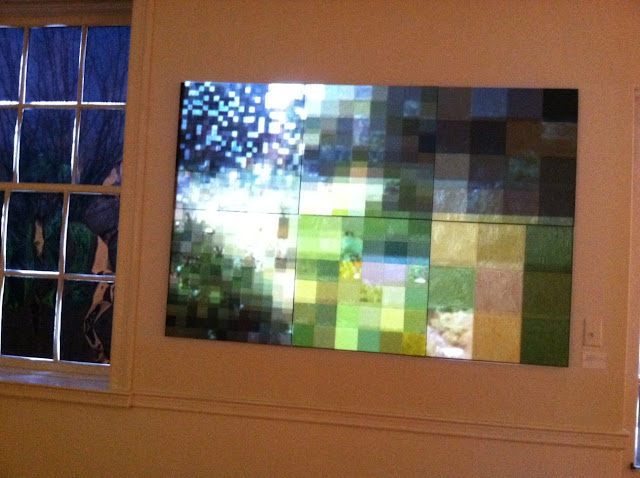 It was a great show, and I was able to have some great conversation with Christine Licata, the curator.  I recommend you check it out - it'll be up through the summer!

Here are some recent drawings, trying to suss out the various techniques I've been developing in prior drawings.  Ultimately I'd like to gain a mastery of these techniques that frees them from their representational subject matter and allows them to function conceptually on their own, still speaking of the grasping for truth and meaning through the revealing and concealing of Aletheia merged with the divinity of a correspondence model of truth, and the grace of working with the given. 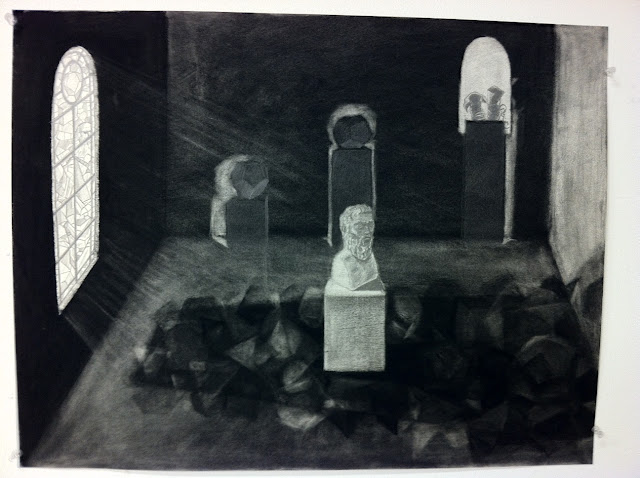 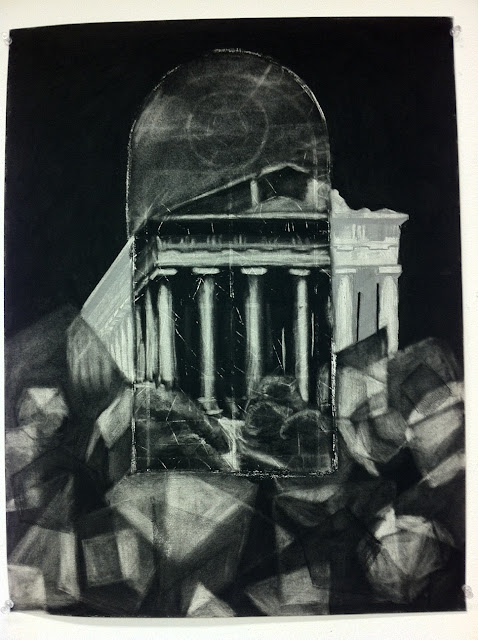 In them I'm mixing 3 techniques: erasure (Heidegger's revealing and concealing, pushing and pulling etc); graphite (correspondance model of Plato's representational truth); and a sort of graphite impression technique in which I draw in pencil on paper on top of my blank sheet.  I then remove the paper, and the sheet underneath is etched with an invisible impression of the drawing.  The charcoal than reacts to that and makes it manifest in the way it fills in the grooves or leaves them empty, and the charcoal drawing becomes contingent on the given impression composition.  I'll talk more about the theology implicit in this technique after my next few drawings, which will explore this idea expressly.