Finished Shadow Project, and an Exhibition!

At long last, I've finished the shadow projection/painting project, just in time for my Gallery Show at the school!  If you're near Montclair, NJ, I highly encourage you to come by the MFA gallery in Montclair State University's Finley Hall to see the two person show (myself and E. Dannielle Slaughter).  It's quite a show, if I do say so myself.  I know, I know, NOBODY knows where Finley Hall is.  Well here, now you have no excuse!

BUT, I do understand we live in a virtual world, so in case you don't have the luxury of coming by and spending some time with the work in person, here's a video walkthrough of the show for you!  Enjoy!

Since this show is the culmination of projects that spanned the better part of the semester, here are some links to my posts of the development of the project, so you can look back and track the history of this show!

Which leads us to here:  The installation.


I wanted the room, upon entrance, to reflect the feeling of "trying to figure something out," so I arranged images of the stages of development of the video painting, mixed with some of my drawings.  Then I arranged the shapes I used and lit them to project shadows onto the arrangement, which I then traced in charcoal.  All of this essentially amounts to the process, both mentally and physically, of arriving at the video projection, which would be hung opposite it inside the room. 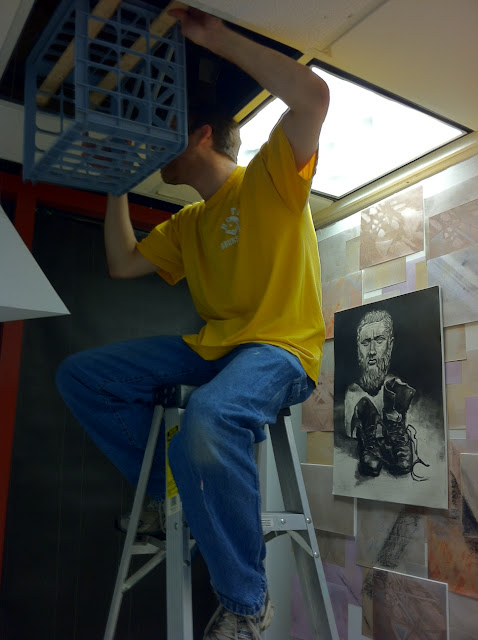 This is where it got really interesting - trying to figure out a way to jerry-rig a projector ceiling mount.  I wanted to solve the issue of technological clutter that so many of our MSU shows have encountered, by essentially hiding everything in the ceiling.  Thank God for drop ceilings, because they are excellent for suspending milk crates and concealing power cords, surge protectors, extension chords, and computers.  Yes, even the computer is stashed up there!  I was then able to build a platform to hold the projector, housed by the milk crate as follows. 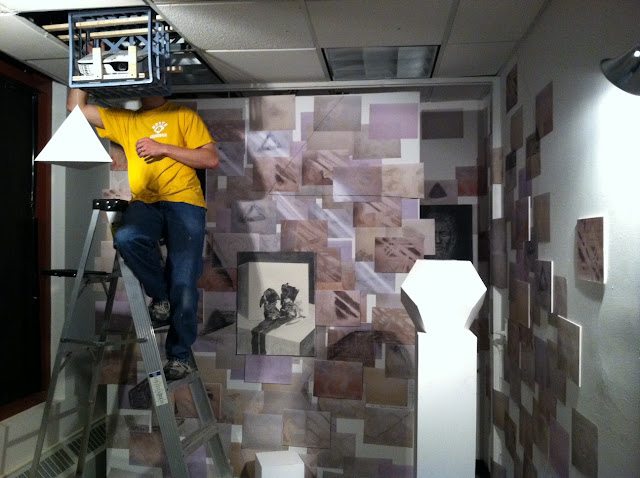 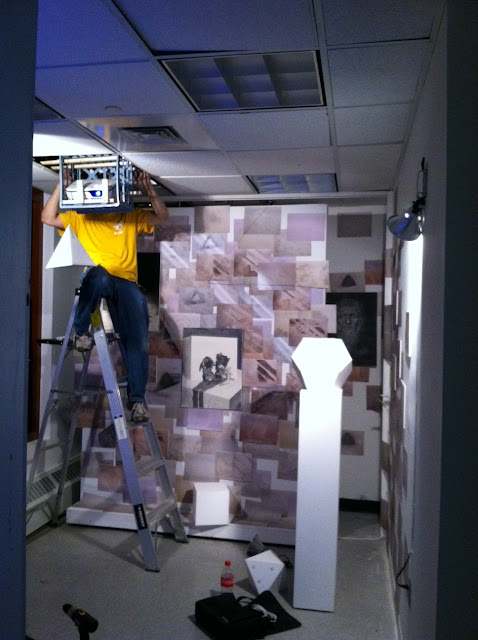 I was then able to use black mesh fabric to soften the lighting, giving the warm orange glow and shadows, but lessening the impact it had on the projection.  I had to do a lot of messing with the projection to simulate the conditions/visual effects I got when creating the piece.  For one, lining up the projected image with the canvas was a nightmare!  Secondly though, the projector I had in my studio was 800 lumens dimmer than the one in this installation and also had different color settings.  So I had to play with the brightness of the projector and adjust the color settings to reproduce all the wonderful things that happened in my studio (Documenting this piece will be tough because of these sort of "intentional accidents" that can only really exist when viewing the piece in person).

I also used moveable walls in the back of the space (to cover up a whole bunch of pipes) and to create a hallway from the main gallery into this project space.  Finished the job with some directional signs, hung my drawings, messed with lighting, and voila!  The final touches included papering over a window so that, in the midst of the sanctuary-esque moment my installation would provide, you wouldn't see Dannielle's video of a woman taking a bite out of the head of a chocolate baby in your periphery!  Kinda ruined the mood.

I'll update my website with the finished projection piece soon, but until then, here's the raw compiled video footage of the piece (about 18 min long, ordinarily projected on a loop).  Sometime I'd like to play around with audio for it too... some sort of Radiohead/Brian Eno/drone music seems appropriate, but it has to be just right.  Anyway, enjoy!