Remember that episode of platonic shadow puppet tai-chi marionette manipulation a while back?  Well I haven't forgotten about it.  In fact I've been hard at work fleshing that project out.  It's transformed a bit since its conception.  With Iain, I started to discover that the shadow videos I was compiling had something compellingly John Cage-ian to say: in it's ambiguity it began to embody the questions I was hoping to raise in the first place.  Similar to the way Cage's non-objective light/dark video work begs questions of origin and purpose, the platonic shadows draw the viewer to a dialogue of purpose and origin.  And after all, grasping at idealism is fundamentally a grasping at philosophical truth (the entire reason Plato even concocted his cave allegory was to get at the truth behind the things we perceive), and truth is essentially the reality of origin and purpose.

Therefore, my approach to painting this canvas has taken a far more abstract turn.  Just as the platonic solids are like shadows on the cave wall, my action on the canvas becomes cave painting on that wall; a grasping at the truth and purpose of those shadowed ideals.  So my entire palate is more or less reduced to various tonalities of white, and the canvas merely shifts in compensation, anticipation, or refutation of the shadows playing upon it, as if to grope for true paintedness.  Here's an example of the canvas itself, sans-projection, in one of its middle stages: 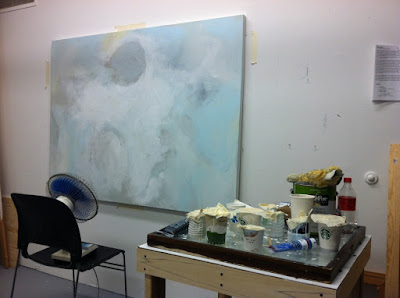 You may have noticed some odd peripheral equipment in the shot... If you'll remember back to my tai-chi video, the rest of this project's process has been no less ridiculous.  Firstly, I needed a way to project the shadows onto the canvas while I'm painting, as well as a way to then photograph the image I paint (without the shadow projection).  So I rigged up this little projection/photography stand/tripod: 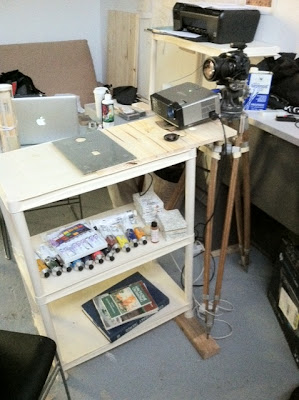 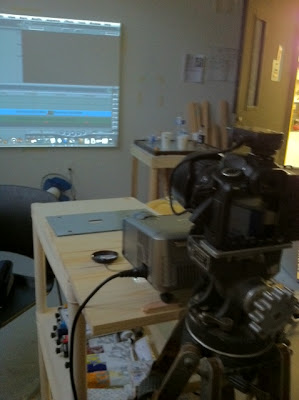 I then rigged up a wireless camera remote to the wall next to the light switch so that after I turn the lights back on (after projecting and painting in the dark) I can photograph the canvas without jostling the camera: 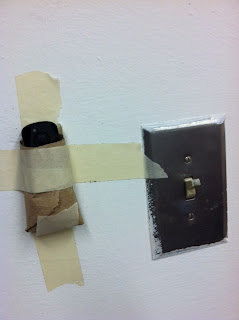 Finally, to make matters as utterly ridiculous as possible, I decided not to use brushes (well, for the most part).  I needed a way to apply large, vague, amorphous areas of paint without distinct brushstrokes, so I went out to home depot and bought one of those absurd fluffy pipe-painter's gloves for some glorified finger painting!  Thus the process goes a bit like the following, repeated over an over again for each frame painted:  (actually its pretty gross how much my camera washed out the projection in this video - I apologize for that.  Check out the stills for a better idea...  You'll have to wait and be surprised by how magical it actually looks in person, with a warm amber glow and stark blueish shadows layering over my paint marks!) 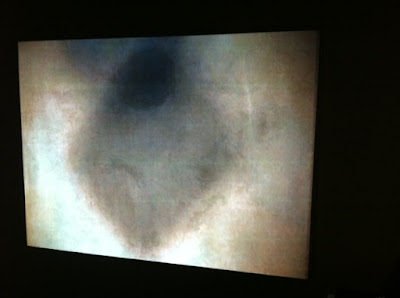 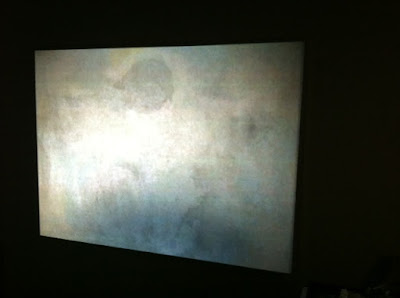 Eventually I'll compile all the painted images into a stop motion animation, layer that with the projected shadow video, and project them together as a video onto the canvas once it's painted back to white.  Its hard to tell right now how long this should end up being, but I've got about 10 minutes of shadow video footage compiled and edited, and about 70 painted frames.  It's pretty enchanting the way the canvas glows with the projection though!  It's keeping me entranced long enough to keep painting so far!  We'll see what feels right for the concept (for instance, there are about 4:15 of just natural light through my studio windows projected onto the canvas before the magic starts happening, taken from a study of my own devotional time.  4:15 was the time it took me to clear my head enough to pay attention to anything remotely divine.  How that translates then to the overall duration of the piece is yet to be seen) More to come when this is further along!