Two Posts in One Day? You Know What That Means...

All-nighter at the studio.  Well, almost.  A coffee and a RedBull shamefully behind me, I think I'm going to opt for a bit of shut-eye after this post...

Lately I've been trying to find any excuse to get back to drawing, so I figured I might as well stop trying to find excuses and just draw something!  As I'm thinking through my other work, and my philosophical position somewhere in the tension between Plato and Heidegger, I decided to start thinking with some charcoal (which may develop into a small series of drawings).

Essentially Plato says reality (and meaning) as we perceive it is just a copy of the ideal - some truly real form that we can only strive to know.  Heidegger on the other hand says that since we can never know such a thing it's a moot point, and that reality (and meaning) is derived from use, context, and the world that an object opens up.  He famously depicts this with Van Gogh's painting of a pair of worn out shoes.  In The Origin of the Work of Art, he describes the world the boots imply (a society and culture that would cause such boots to be necessarily made, used, and then depicted as art), setting up a correspondence theory of meaning.

I'm finding in my own conception of Spirituality and reality, there must be room for some ideal, perhaps outside of ourselves that we are to strive towards (Plato) and yet the rubber has to meet the road somewhere so as not to ignore the obvious contextual meaning things accrue through function (Heidegger).

I decided to pit Heidegger's theory against Plato's, representing Plato with a drawing of a Roman copy of a Greek bust of Plato (which he would argue is still another step removed from the true essence of the thing!).  To start the series, I sat my copy (of a copy of a copy of a copy) of Plato next to Heidegger's world-making boots, and drew them in a style that would in some way begin to merge the two.  I decided on charcoal for its inherent tendencies towards deep shadow (very Platonic) but rendered with a hint of Van Gogh gesture (very Heideggerian).  Stir in some irony and a big fat unresolved philosophical question, and this is the result! 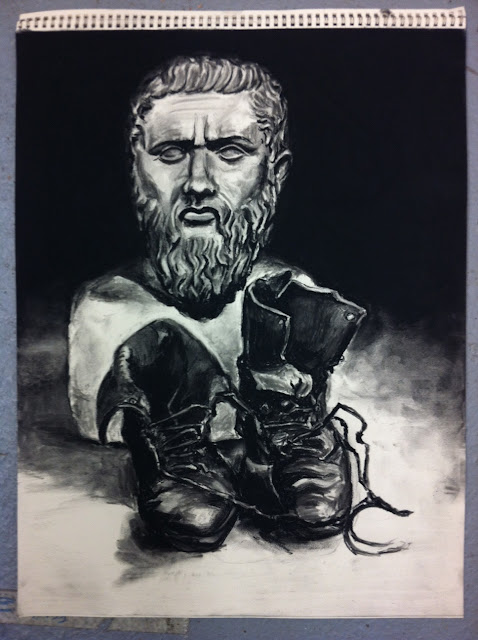 I haven't really used charcoal like this in a few years and I forgot how much fun it is!  ... But now it's time for bed.  At least for a few hours!