More drawings!  Here is the continuation of the series of drawings I started, weighing Plato's philosophy of truth and meaning with Heidegger's, ultimately trying to find some third compromise between the two.

The first in the series, of course, was the charcoal drawing of the bust of Plato with Heidegger's old boots.  The second, which has gotten particularly good reviews amongst faculty and peers (and is my favorite too), was Heidegger's boots as drawn by Plato.

Next - Plato's bust as drawn by Heidegger.  Guided by the revealing/concealing light of Aletheia, I blackened the entire page and then drew out the form from the center of the void using an eraser.  As Iain points out, outlines and borders are a great way to draw something you know exists.  But if you're truly struggling to find Heidegger's kind of truth, you can't logically draw in a manner that presupposes that you know what exists. 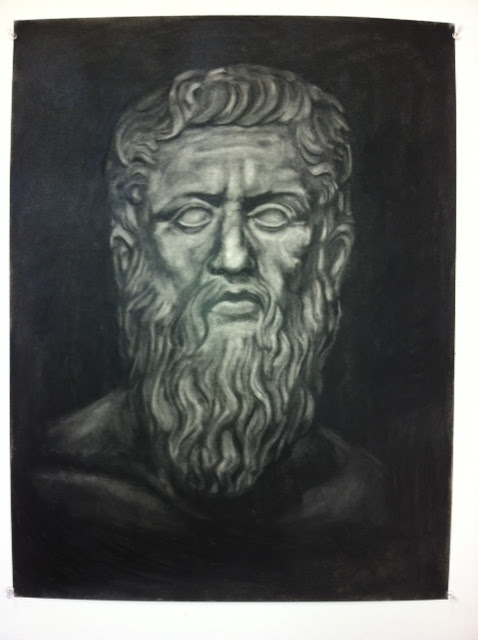 The 4th in the series attempts to put the two in the same space and watch them duke it out.  The Temples at Paestum (which Heidegger references in the same text as the boots) is created in the shadow of the Platonic form (using the more definitive, mimeographic nature of graphite), but then sheds Heideggerian light on the land around it (using the charcoal aletheia technique). 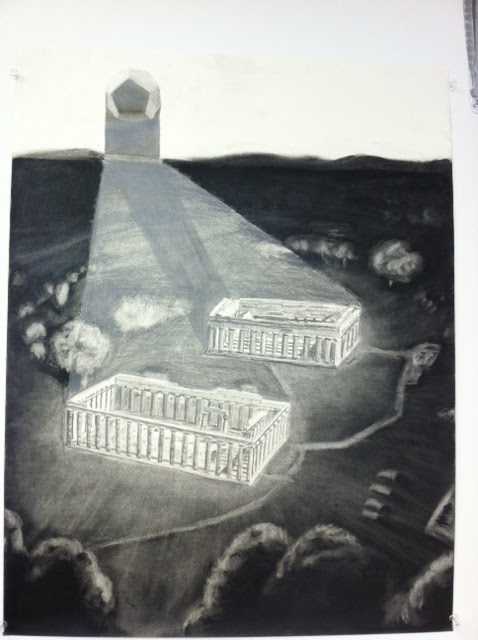 The fifth strives to reconcile the two with a sort of Pauline or occult duality in which "things above are as they are below." The only way for Heidegger and Plato to both be right would be if Plato's ideal forms were just as contextually dynamic in meaning (the "above") as Heideggers boots or temple (the "below"). The temple "below" is drawn in platonic ideal graphite, but the space made for it is cleared with Heideggerian aletheia charcoal erasure.  Inversely, the "above" temple is given a definitive space within the Platonic graphite realm but fleshed out with the Heideggerian charcoal. 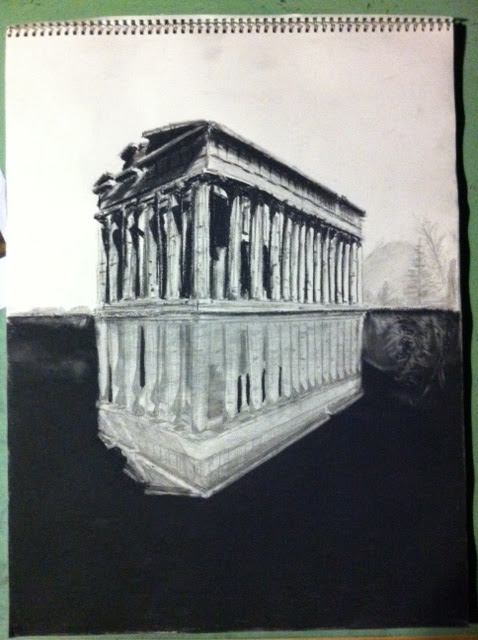 Unfortunately, the natural visual outlet for this philosophy seems to have already been discovered by Downton Abbey...

The sixth therefore makes the case that "everything is spiritual" and thus nothing in the spiritual realm suffers by being subsumed by Heidegger's aletheia.  As it turns out, the ideal forms outside Plato's cave only acquire their meaning given their context of being outside the cave and the prisoners having been ignorant to all but their effects prior (which essentially is Heideggers point in the first place).  Heidegger writes that Plato's allegory is in fact not about truth so much as education - the process of informing the shadows with a new context.  Truth is therefore not in the ideal forms, but in the newly in-formed shadows that have taken on a deeper and richer context given the knowledge of the forms creating them.  And so, Plato isn't so very un-Heideggerian after all: 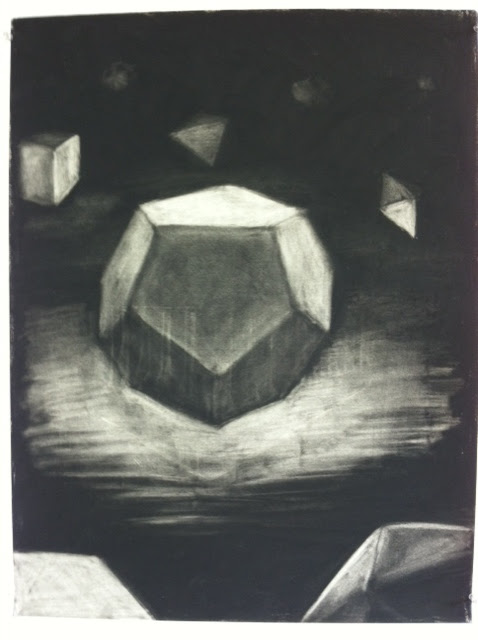 Interestingly, I was able to use an accidental flaw that showed up in drawing no. 3 to clever effect here, in which the pressure of the pencil lines from the lower half of Downton Abbey (as it shall be called from here on) pressed through and engraved the page beneath.  When the charcoal fills these etching like crevasses, the erasure gives the drawing a "memory" of the prior drawing.  And so the memory of the overlaying of Heidegger and Plato in the last graphite/charcoal endeavor shows through as a ghost that informs the erasures of this Heideggerian drawing of Plato's forms.

I'm going to continue on with this series, if nothing else, just to keep exercising my noggin. But I hope, in part two of the series, to elaborate on the merging of the philosophies in a way that begins to transcend Heidegger and Plato into a more Valosinian (...that's terrible) expression.  The goal is eventually to have developed a method of drawing that embodies my unique take on reality.  We'll see.  This blog is getting way too dense right now though.  I'll have to make sure my next post is relatively devoid of substance...