I felt like Alexander Graham Bell making his first successful telephone transmission as I called Marc the other day to report that I had finally worked out all the kinks in our interactive video installation's programming, and that we'd officially have something functional to install this coming week! 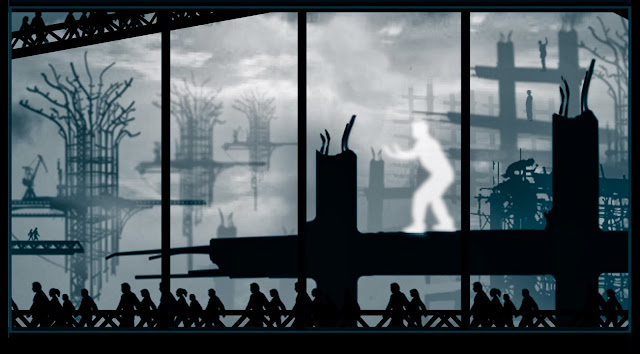 Countless hours went into creating and compiling the video of the stock silhouettes and motion background elements with Marc's still image in Final Cut, only to find that Processing just wasn't having it!

After 9 different configurations of Final Cut export settings, I finally stumbled upon the codec that wouldn't cause the video to crash or drop frames when importing into processing, solving problem number one.

With that weight lifted, I began translating over the programming from my prototypes to the specifics of our final imagery. You can imagine my terror when I finished, proof-read it, and clicked play only to find a black screen. No video, no Kinect, nothing!

Panicking, I googled every possible keyword that came to mind, and came up with nothing. Many harrowing hours later, I finally came to the realization that I had always been overlaying the Kinect imagery with a jpeg in my prototypes, figuring video would be the same, since processing handles them both as images (one just gets replaced every frame by another image). When overlaying with a video, it began to try to mask itself using the current frame of the video, which only exists for about 1/30th of a second, resulting in a flash and a black screen.

I regrouped, added a dummy still image to be the overlay against which the Kinect could show up, and then layered the video on top of that, only to find that, though now masking properly, it woudn't overlay. Somehow I gathered the presence of mind to apply the tint() fuction, which made the Kinect transparent enough to see the video underneath. Yet, it was too washed out for my liking. Figuring I couldn't mess it up much worse than a black screen, I tried increasing the opacity in the tint's arguments until it was nearly opaque, but still overlaying. Just for kicks, I dialed it up to what should have been complete opacity and, to my surprise, found that it was indeed still overlaying, but with fully saturated colors, just as I wanted...

Then it hit me that the final object displayed in the code was displayed as transparent, and so each run of the draw loop still retained that info from the previous run, applying it to the first object displayed as it looped around. By telling it explicitly to stop that, it turned out to actually be a pretty easy fix!

With a brief respite to run around the yard and do a cartwheel or two, I sighed a breath of relief and could move forward!

Then it was just a matter of getting my very patient wife to flail her arms compliantly in front of the Kinect while I tweaked the locations, colors, and thresholds for the final product.

So without further ado, here's a demonstration of the final product in my studio before installing this week, followed by the statement that will accompany the piece. Hooray!

Venae Cavae is an interactive video installation centered around themes of decay, revitalization, and the relational aesthetics that underpin such transformation. Like the veins of the same name in human body, which carry deoxygenated blood back to the heart to be revitalized, the viewer and passersby are transported into the landscape, to become signs of life, light, and vitality amidst the ambiguous landscape. This landscape becomes a new arena for bodily interaction, in which virtual space is intermingled with real space. Just as the passersby activate the virtual space of the installation, they simultaneously activate the physical space of Market Street itself, becoming analogous signs of life, light, and vitality amidst Aferro Gallery’s revitalization of Newark as a whole. This multiplicity of space is folded into yet another dimension with the accompanying light and sculptural installation in the physical space behind the video. The projected, sometimes inverted shadows, traversing these disorienting spaces ultimately generate relational encounters in which creative acts coauthor a further understanding of our surroundings and ourselves. Venae Cavae marks the first of a series of collaborations between artists Marc D’Agusto and Eric Valosin, who extend similar relational revitalization efforts to their work with Gravity Arts Initiatives.

Only thing left to do was to test it with a projector. Voilá! 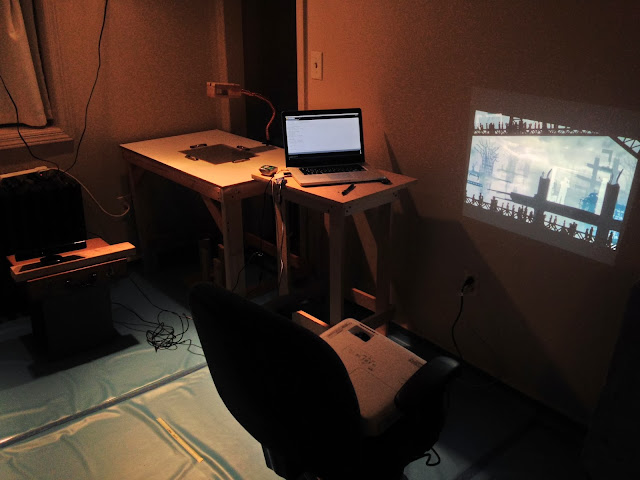 Life is good.
Posted by Eric Valosin at 2:43 AM