Yesterday was one of those days in the studio that reminds me why I'm an artist.  One of those days where if anybody else walked into my studio they'd ask why I was doing marionette shadow puppet Tai-Chi.  You know those days.  The kind that makes you stop and think to yourself, "I can't believe this is how I just spent the day and it's actually considered work!"

The backstory goes something like this:  As I investigated Plato's take on Idealism, I was drawn to his famous cave wall allegory, and decided to construct his ideal forms. 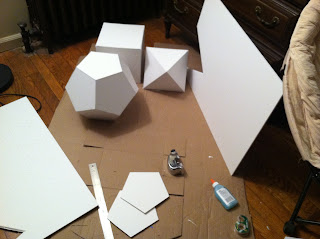 I was then faced with the immediate dilemma of what to do with them!  In true Platonic fashion, I decided to project their shadows onto the "cave wall" of my canvas as the basis for the beginnings of my drawing/painting.  But in order to do that, I needed 2 things:  1) A light.  2) A way to get the shadow of the platonic forms on the canvas without the shadow of me holding the platonic forms in front of said light!

So, I slinked over to the undergrad art building, Calcia, on a mission for a light to "borrow."  Tipped off by the former director of the MFA program, I put on my "trust me I'm supposed to be here" face and went into the drawing studio, full of students watching me fumble around with one of those large lamps in a cage sitting on a giant yellow tripod, as they prepare for a class.  Mission accomplished (awkwardly, maybe, but nonetheless accomplished).  ...Returning the light was a different story, considering when I tried to bring it back to the classroom they were there in the midst of their class, complete with nude model.  Lets here it for friends who TA in the room across the hall and are willing to safeguard a lamp until the nude model next door disappears!

Then, back in my studio, I set out to solve dilemma 2 by jerry-rigging a sort of fishing rod pulley apparatus out of a stretcher bar and fishing line, by which I could manipulate the rotation of the Platonic form as it dangles in front of the light. 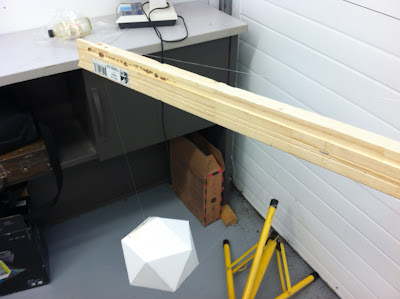 I attached the top of the form to the middle of the stretcher via the fishing line.  Then, by attaching a line to the bottom of the form, then threading it through the slit at the end of the bar (my pulley mechanism) I could then pull it with my left hand (holding the bar in my right) and spin the form.  The following Tai-Chi ensued for the next several hours as a camera filmed the canvas.  Heres the behind the scenes, set perhaps all too appropriately to Thom York's lyrics, "You can try the best you can... The best you can is good enough!"

I'm excited for the ridiculousness that is sure to comprise the rest of this piece.