Billy Joel was wrong! They are indeed not closing all the factories down, but rather converting them into artists' studio space! 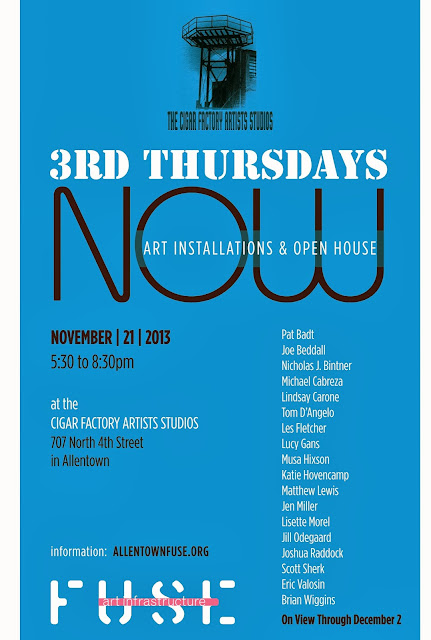 This past month I've been participating in a studio residency program (Ok, so Billy's half correct, I guess we are living here in Allentown...) at the Cigar Factory Studios and Gallery, run by Fuse Art Infrastructure. Every month (this is the third month) Fuse holds Now, a series of concurrent solo exhibitions/projects. Essentially, as one of the participating artists, I was given a 28' x 17' room all to myself to play with!

Usually I like to spread these posts out a bit more, but it's been a busy month so you get the fly-by-the-seat-of-your-pants, WAY-more-information-than-you-signed-up-for, swallow-a-month's-worth-of-pills-in-one-gulp version of my progress working towards this exhibition.

Enjoy these pictures, and I'll fill in my thoughts and the backstory as we go! 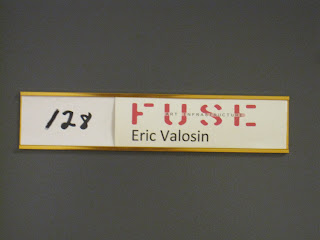 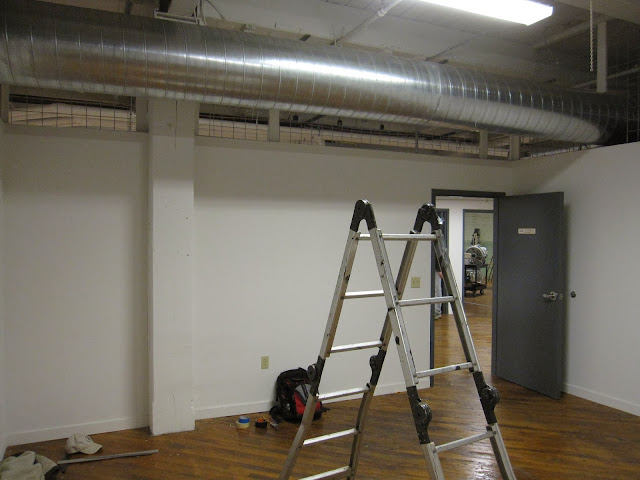 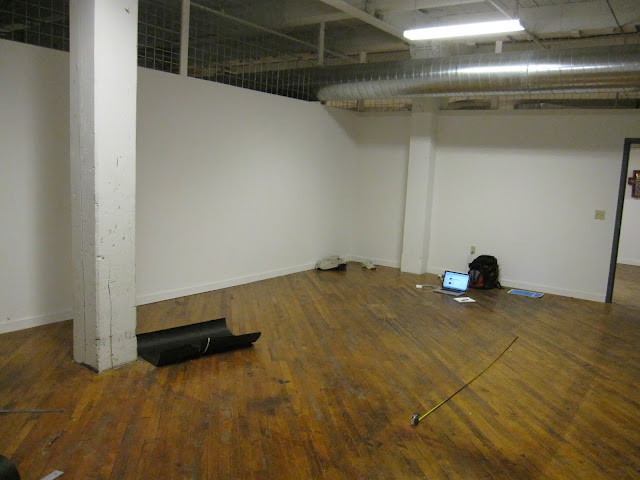 So now I had to decide what I wanted to do with this fantastic space. Given that the Now series is geared towards experimentation and even, explicitly, revisiting prior unresolved ideas, I thought this the perfect opportunity to come back to my projection onto glow-in-the-dark paint idea. In the past, though the potential for the technique was fantastic, I wasn't totally satisfied with the form it took for my first attempt at a project using it. So I decided to give it another go. (For the record at the time I had been the first person to discover this technique according to Google. I believe now Tricia Baga has also begun using this technique, which makes her the only other person that Google seems to know about who does this. I'm not entirely sure whether she or I discovered it first, but the fact of the matter is she made it to the Whitney first, so it probably doesn't much matter! We are doing some very different things with it anyway, and her work with it looks very interesting in its own right) 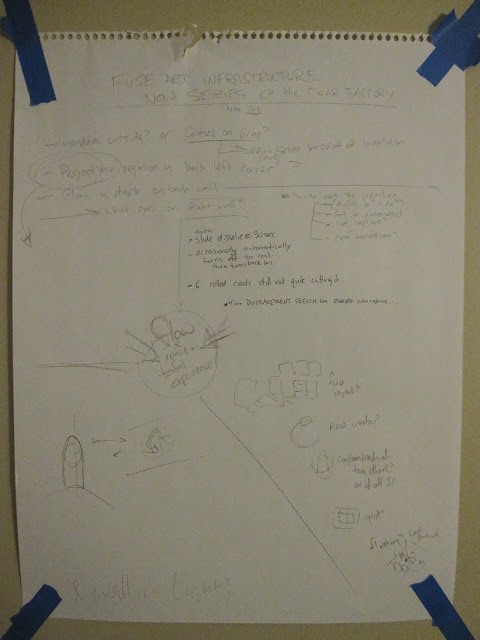 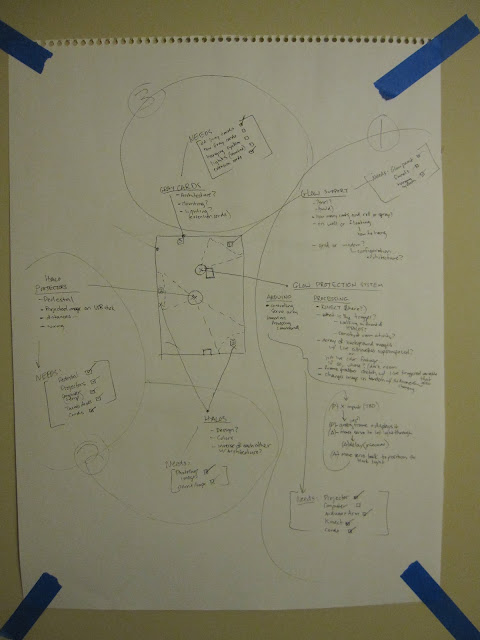 I knew since projecting onto the glow paint would require darkness, the other projection pieces would be best suited as new iterations of my Hyalo technique, which uses the dark environment and the glossiness of the paint to create an odd illusionistic stained glass like effect.

Furthermore, I wanted to position 3 projection pieces (3 felt like an appropriately trinitarian amount) in such a way that they would set the room slightly off balance (or at least asymmetrically on balance) and encourage an awareness of the viewer's navigation of the space itself.


So the first projection, a rose window type image, would be off-center to the right side of the left-most wall upon entering. Opposite it, projected into the back right corner would be the second piece, an arch-like piece. The final glow piece would be directly ahead, also off-center to the right. And potentially some of my gray card drawings would be interspersed throughout the room to help coax the viewer's movement as they block the projectors and interact with the pieces.

But first things first, I needed a pedestal! 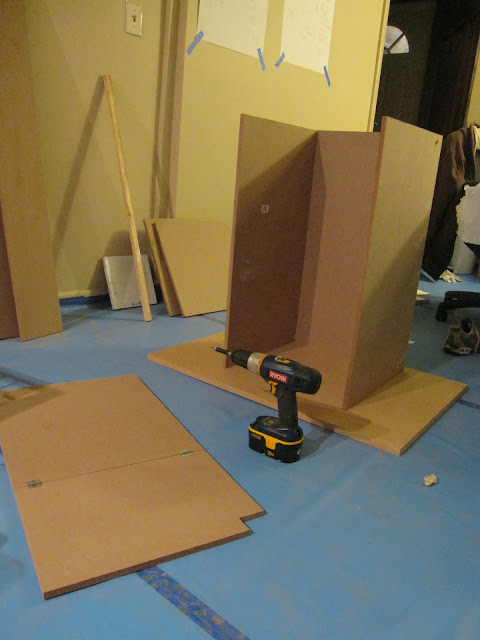 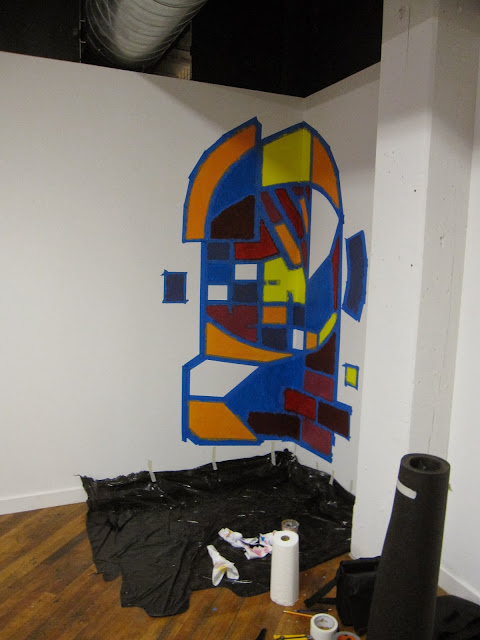 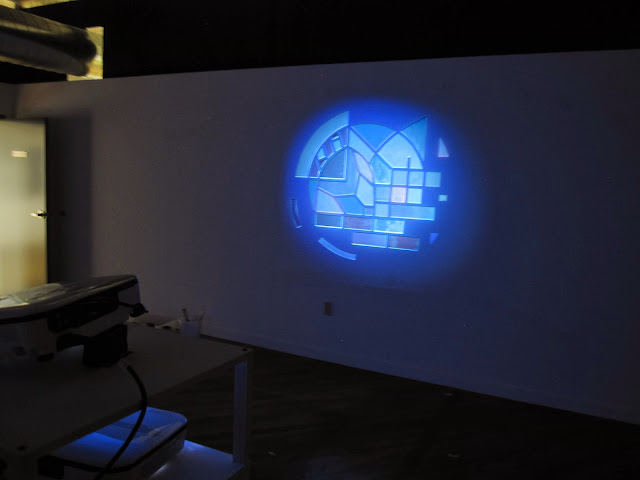 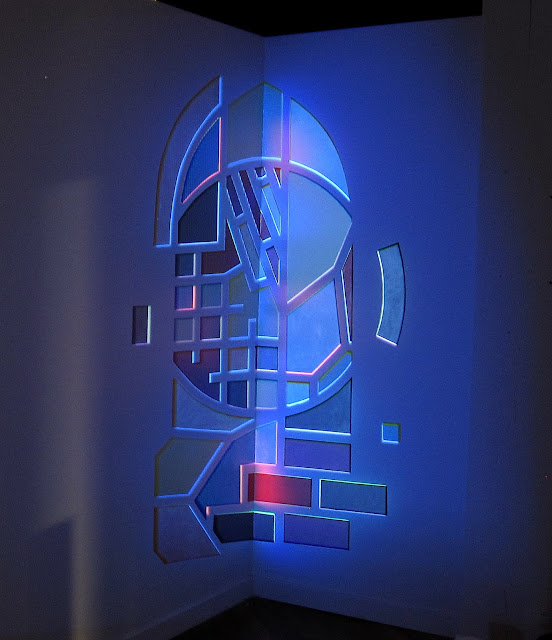 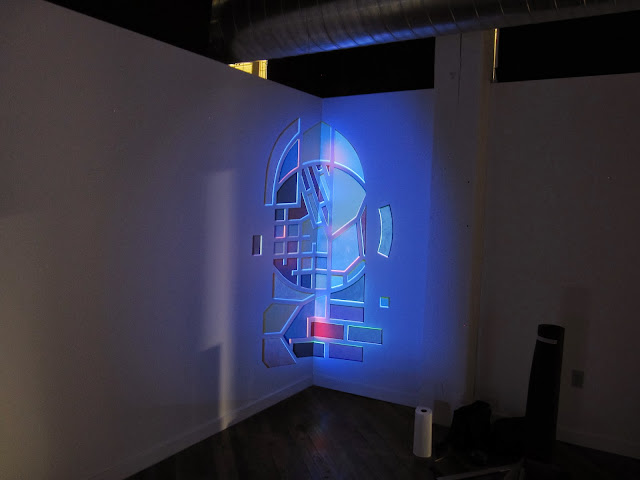 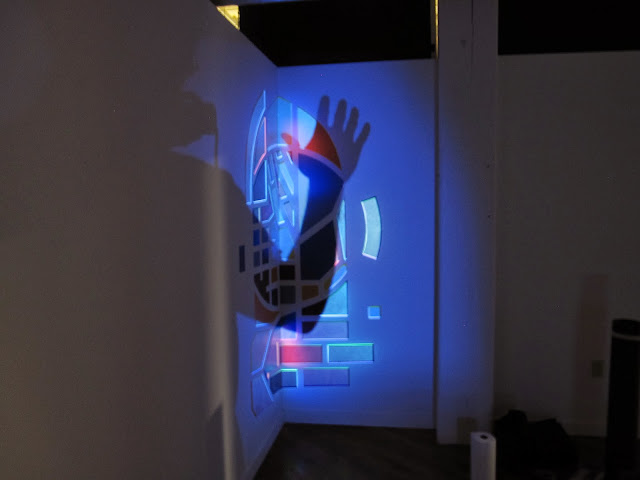 And now, finally, on to the third projection piece, which I'm calling Luma, the glow in the dark one!

From experience, I knew the projector cannot project nothing, so in order for the piece to glow, the projector has to be blocked periodically so that no light comes through. I decided to upgrade my prior apparatus a bit... 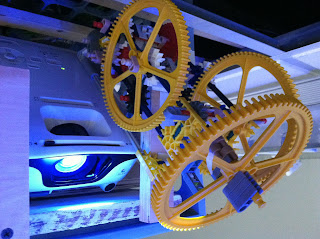 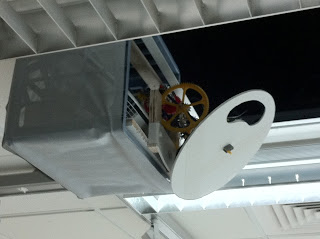 ...which was clunky, noisy, and often got out of sync with the projection. I decided to replace it with something a bit sleeker and more responsive. So I started researching how to control an arm that would block the projector using an Arduino microcontroller and a servo motor. This would allow for more precision and integration with the image projection (which would also be created in Processing, which uses the same Java based language as Arduino), not to mention a smaller package. 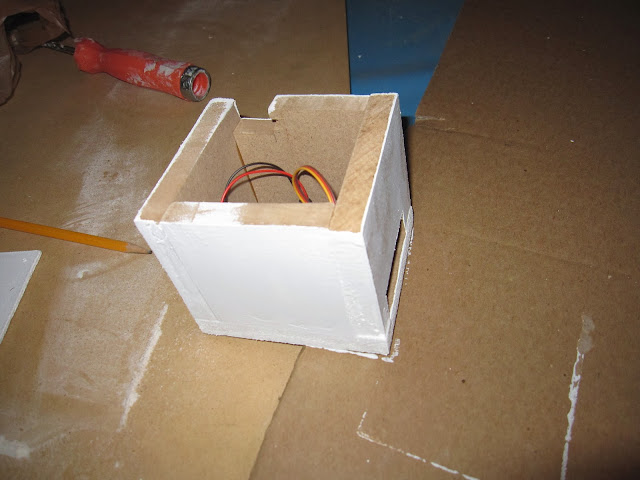 The program I then wrote in Processing for the glow piece essentially functions this way: When the viewer first sees the piece, he sees a darkened, monochromatic live-feed video of himself in the room (as if the projected image were an odd mirror). As he move around, however, the computer detects his presence and, in his silhouette, reveals another full color image (yet to be determined, but I'm thinking either an image of Allentown or other parts of the building - perhaps even "through" the wall to the room behind). After a few moments of interactive exploration, the image freezes, projecting a still frame of the interactive video onto the glow-in-the-dark coated surface.

At that point, the program tells the Arduino to lower the arm, cutting off the projection, and allowing the photographic rendering of the image captured in the glow of the paint to linger. Once the rendering of the glow begins to fade, the computer raises the arm and the cycle starts over again.

Continuing the theme of site specificity, I decided to make the glow surface comprised of panels that fragment the floor plan of the Cigar Factory into a sort of stained glass like geometric image. I'd also been thinking about mandalas being essentially floor plans of temples. I see no reason why the floor plan of this very space couldn't be just as sacred and serve as its own meditative image.

And finally, I could test out the projection (using a stand-in image of downtown Allentown)

I still have a bit more to do - ironing out exactly what image I will reveal in the sillhouette of the user and the timing of the program, as well as preparing the gray card drawings, but I'm very excited to see this project come together! As I look back on this last month, I've managed to somehow fit what could have been a semester's worth of work in grad school into just 3 or 4 weeks, from learning circuitry and Arduino programming, to designing 3 new projection pieces, to fabricating a 3 tiered pedestal and all the necessary components for the projects themselves, to writing the code for the glow piece's programming, and all the minutiae in between.

When next you hear from me I'll have images from the opening to share! Thanks for bearing with such a long catch-up post, and I hope you're as excited to see the culmination of it all this thursday as I am! 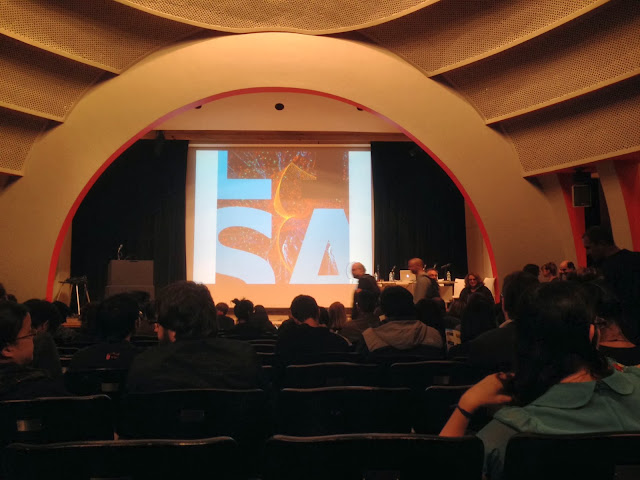 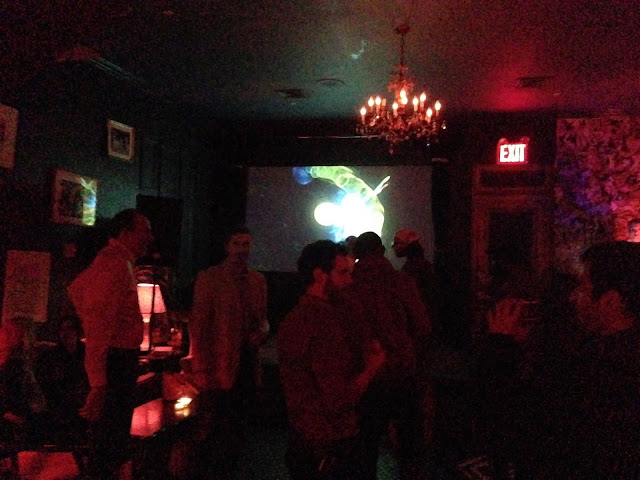 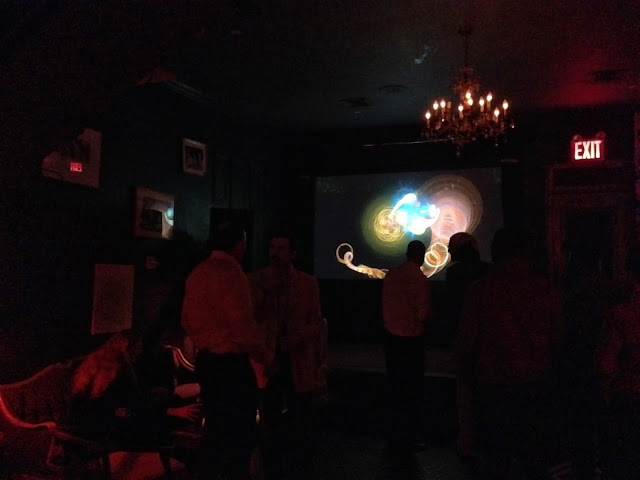 Posted by Eric Valosin at 2:53 PM No comments: