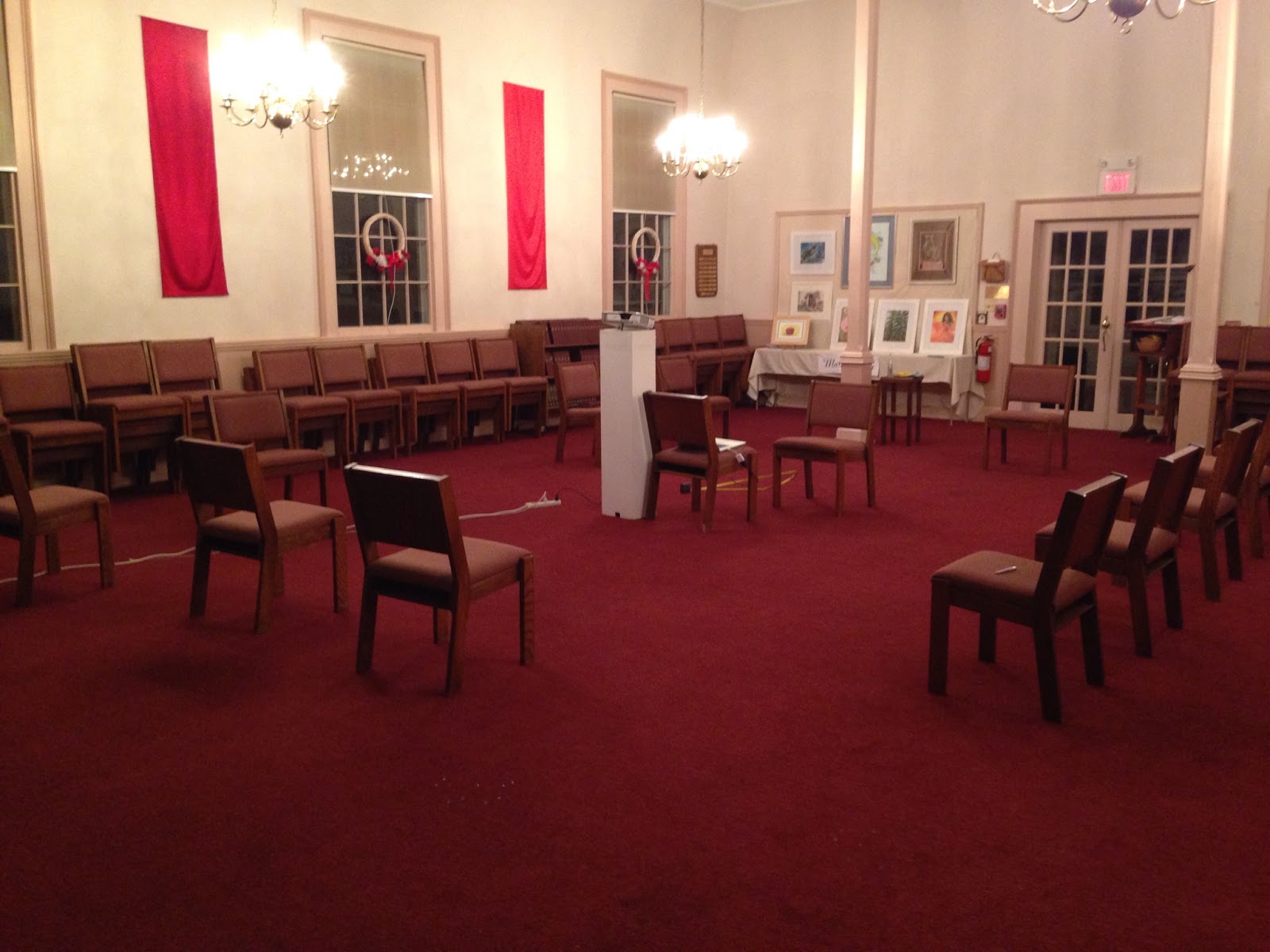 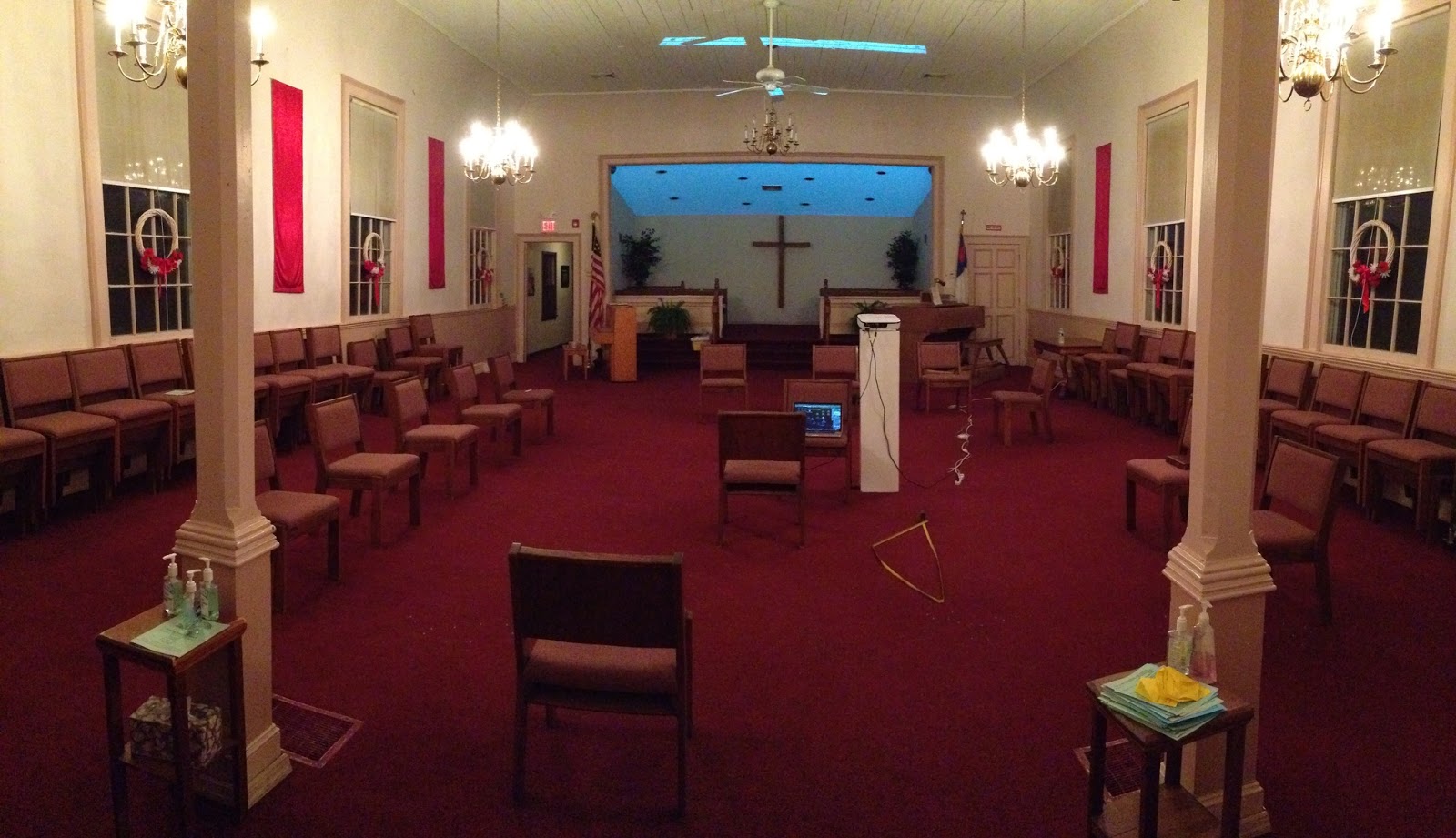 Follow this project to the next post about it here
Posted by Eric Valosin at 12:23 AM No comments: 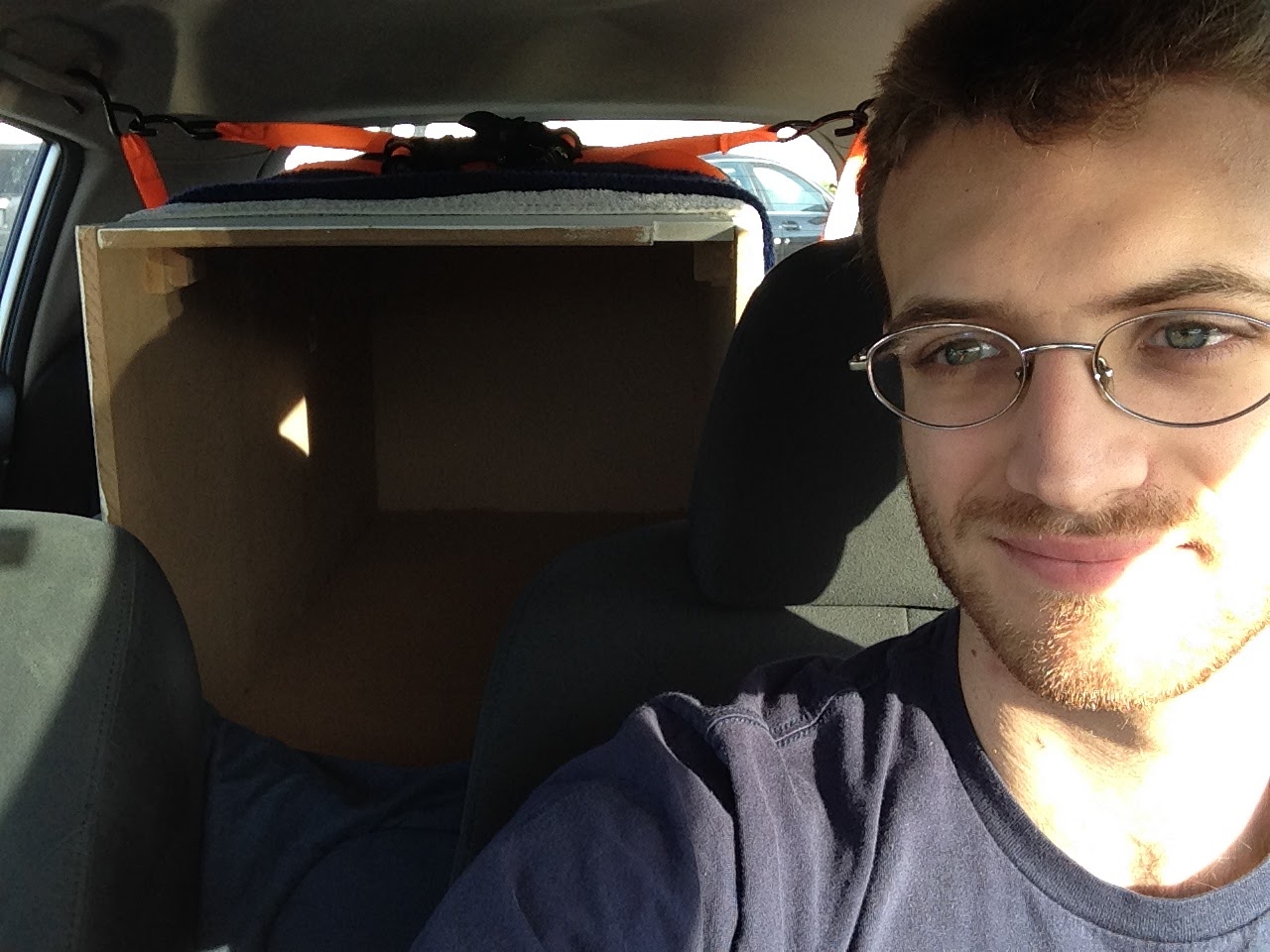 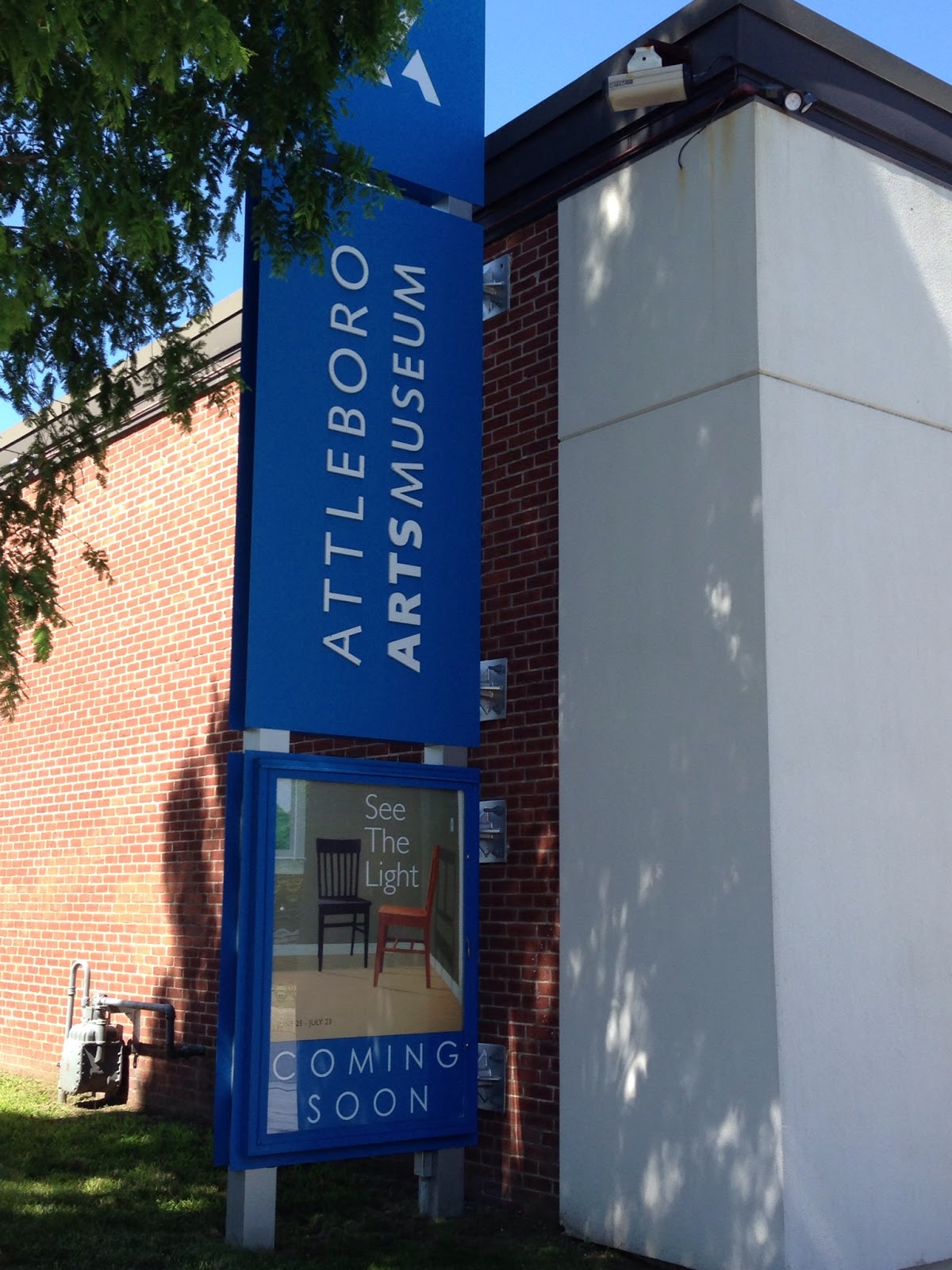 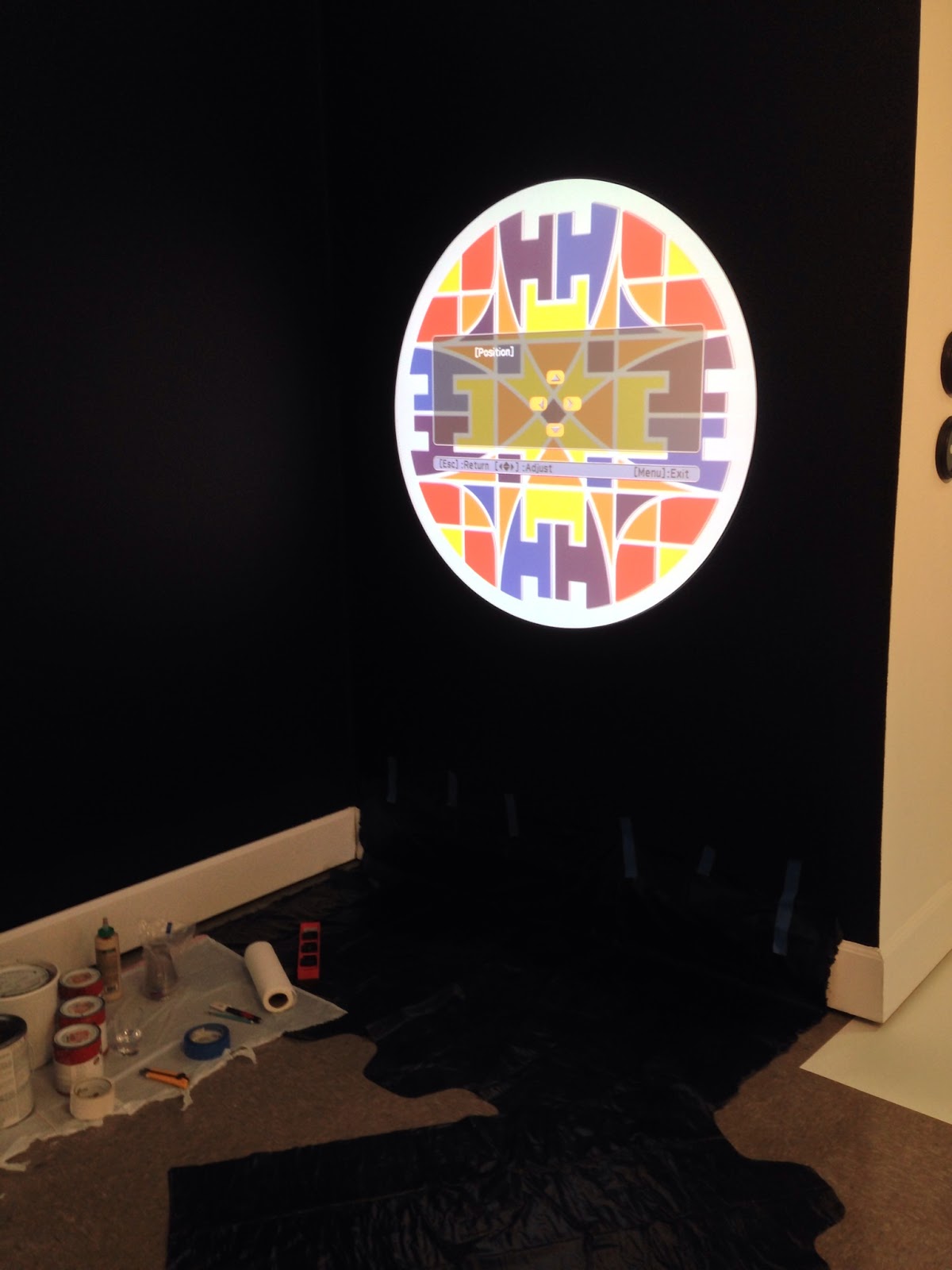 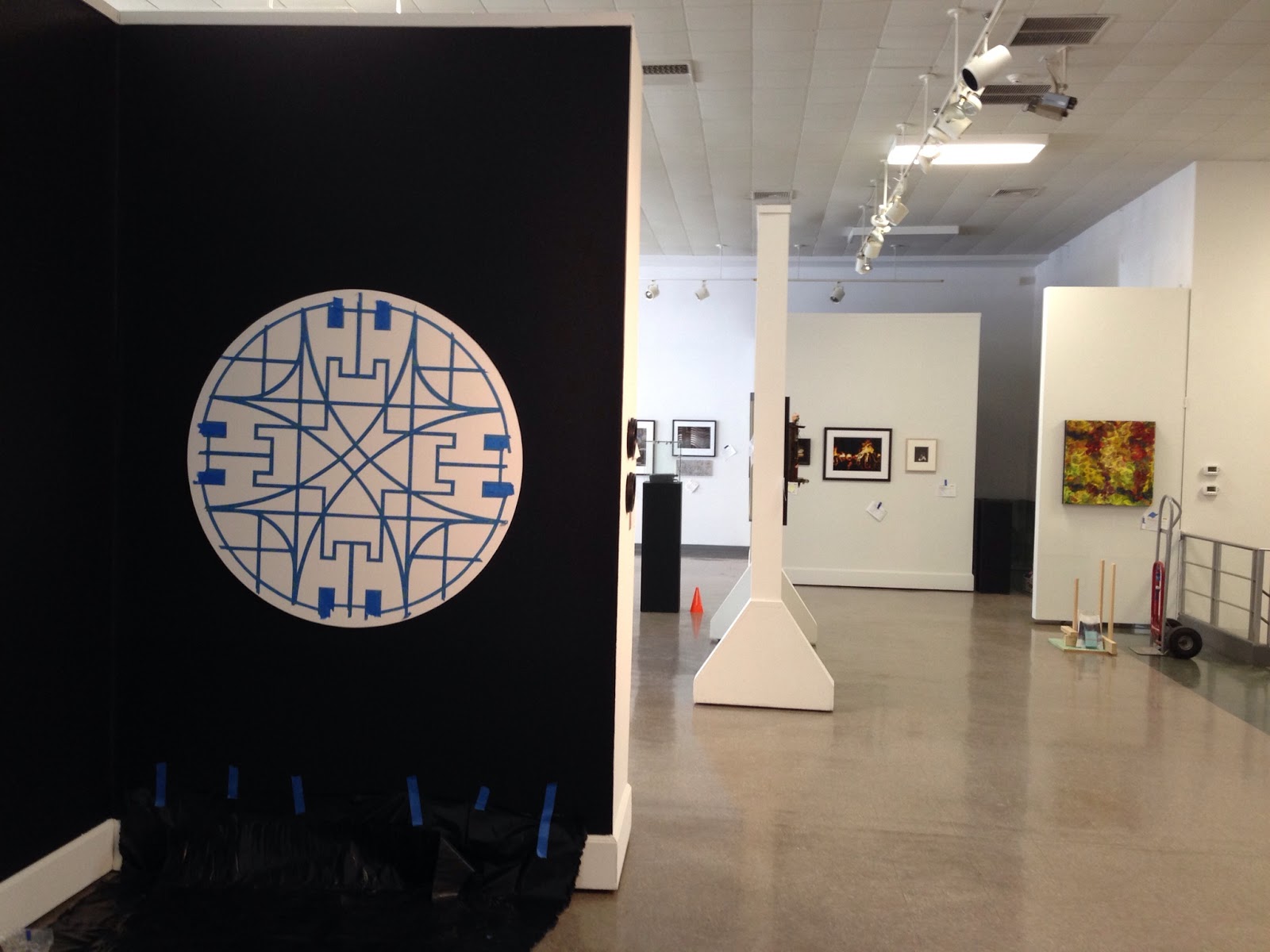 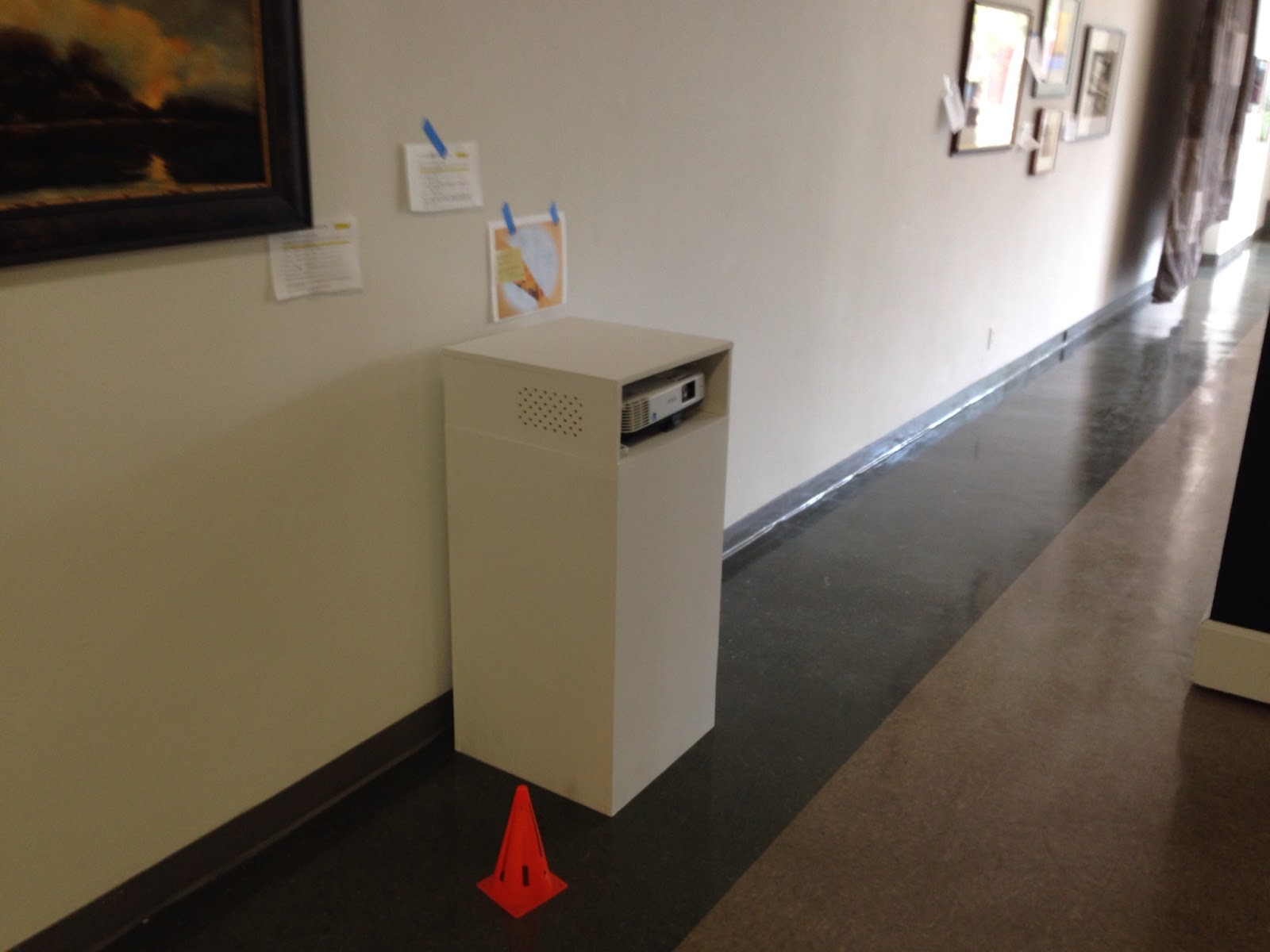 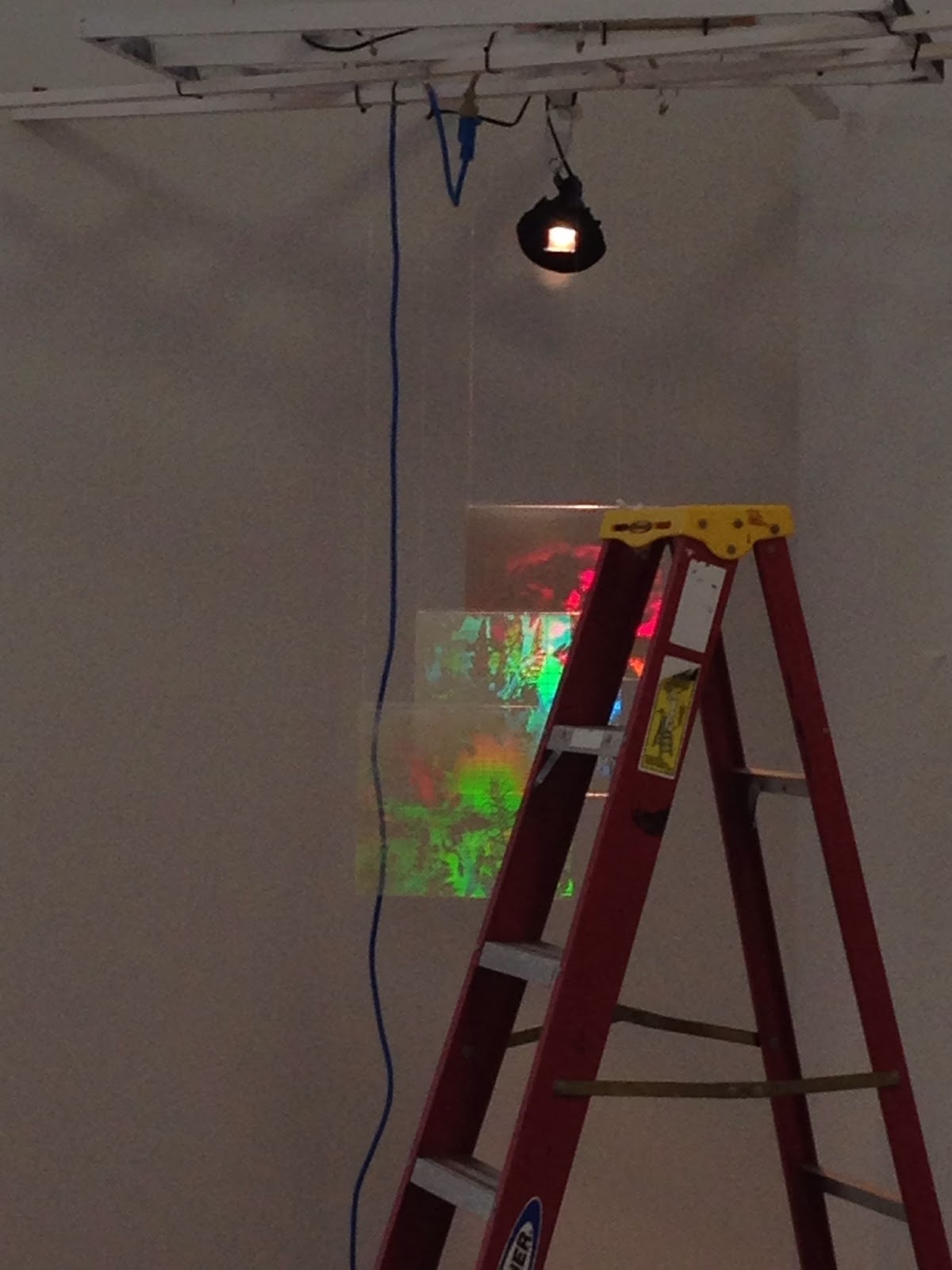 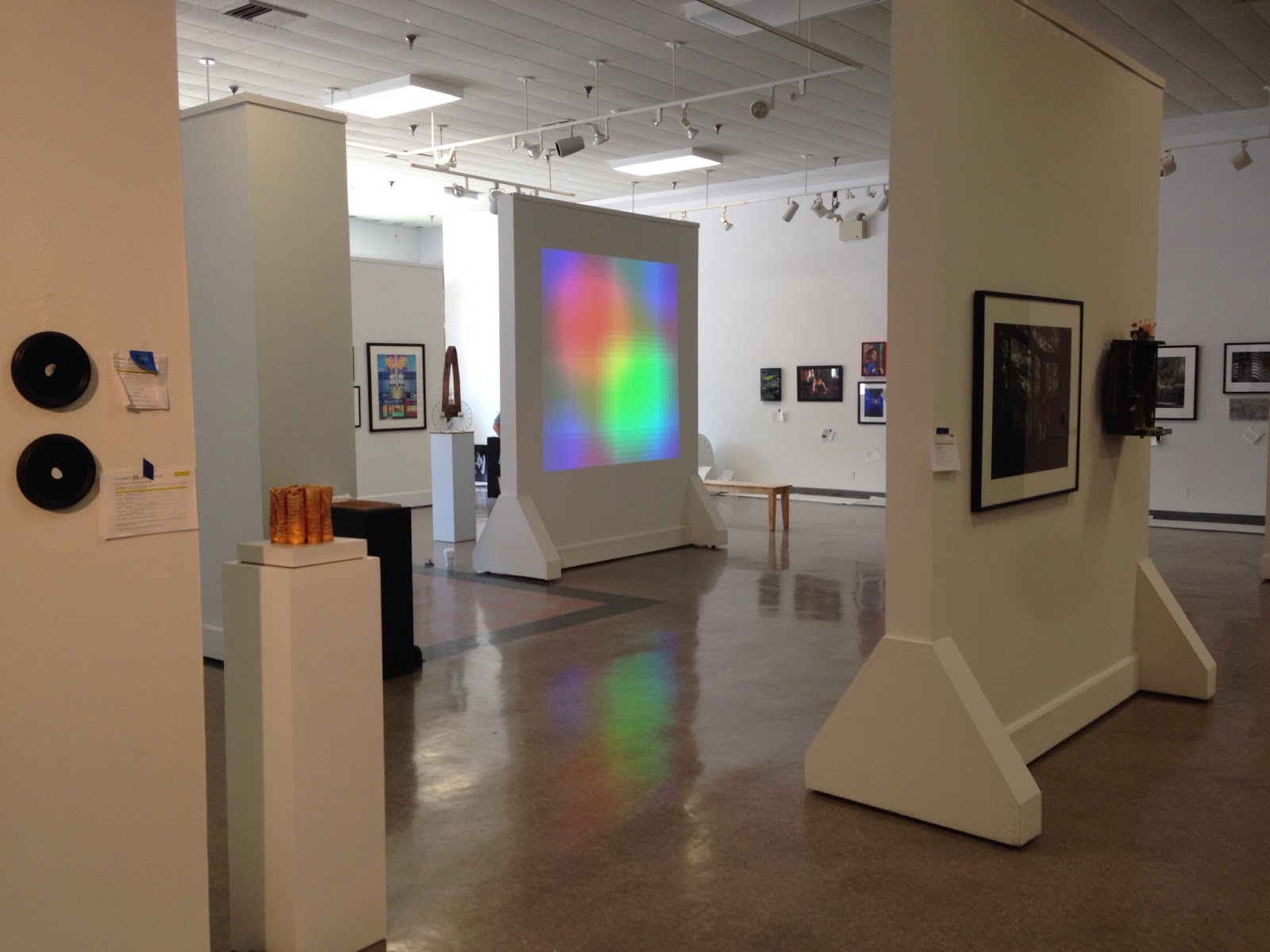 I'm very excited! When next I post, you'll get to see the finished product and some shots of the opening! Wish me luck!
Posted by Eric Valosin at 1:12 AM No comments:

Starting to See the Light

At the end of the week I'll be heading up to Massachusetts to install for See the Light, a national juried exhibition of light based artwork at the Attleboro Arts Museum, opening 6/25/14. Those of you who made it out to Untitled at the Walsh Gallery of Seton Hall last year may recognize my projection negation piece UnKnowledge. For this show I will be installing it anew at the museum!

I've been diligently prepping, as I'll only have 2 days there to install (one day to paint and hang the piece and set up the projector, and one to calibrate the projection.), so there's little room to fudge any of the logistics.  It's a daunting task, but one I'm certainly up for. I feel like an olympic sprinter, truing to shave seconds off of each iteration - my first go-round with projection negation at the Walsh Gallery took nearly a month to install, and by the time I got to Gnomon I had it down to one week. Then Tryptich slid down to just over 3 days, and having done this particular piece before and having learned from each past installation, I'm confident I can rise to the task... as long as nothing breaks... [knocks furiously on wooden pedestal]

I've been priming boards, building pedestals - I'm pretty sure I'm about 2/3 artist, 1/3 pedestal craftsman by now - testing technology and gathering hardware. I'll also, for the first time, not be painting on the wall itself, but on a hangable board (though the imagery will still be painted in-situ).

As usual, here are some lovely process shots for you! More to come when I embark northward at the end of the week for install! 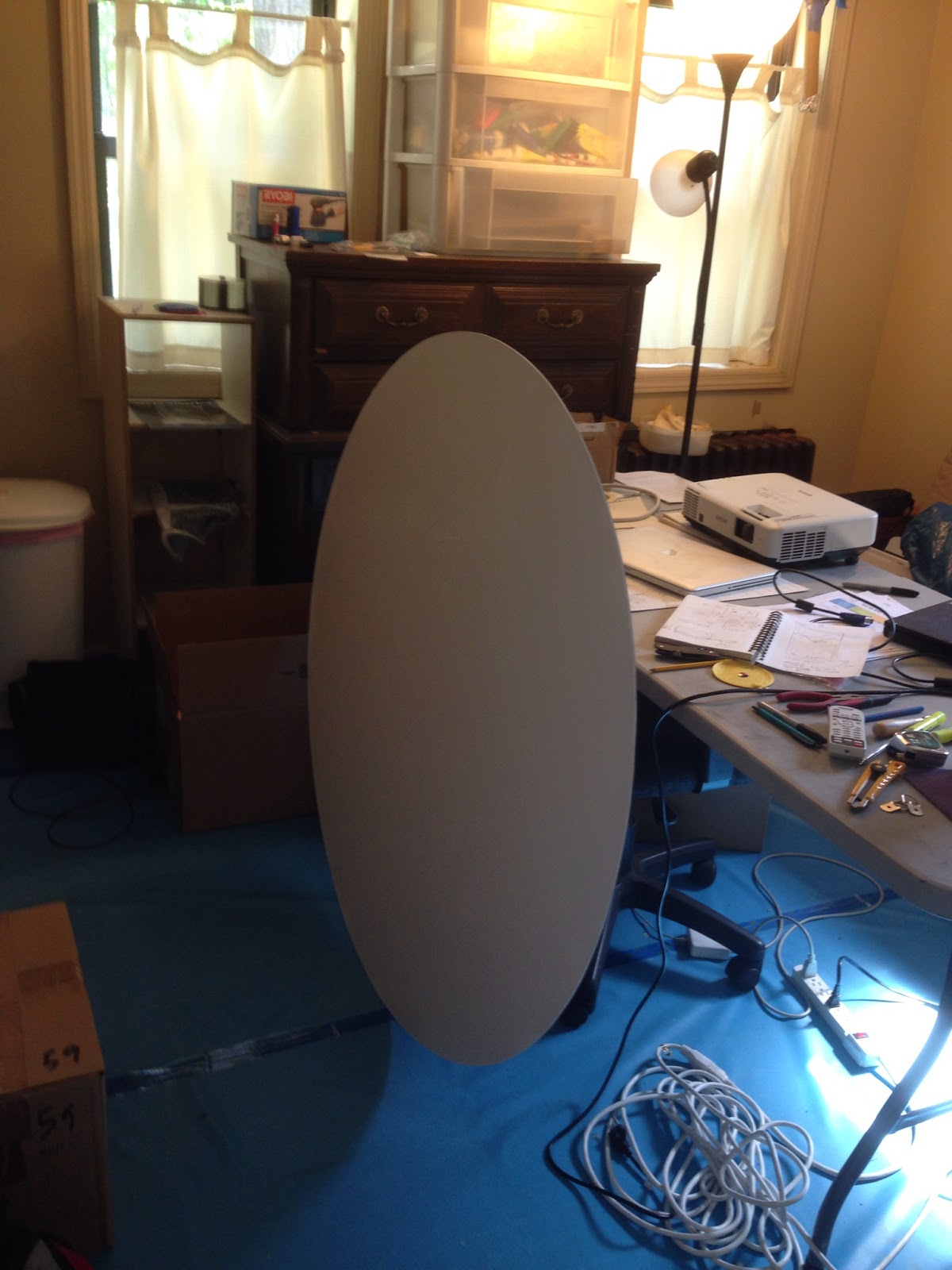 Posted by Eric Valosin at 1:41 AM No comments:

I'm happy to announce that I will be participating in my first museum group exhibition this month at the Attleboro Arts Museum in Attleboro, Mass this July! The show is called See the Light and features work that is concerned with or uses Light as a medium!

...I will be heading back up to Massachusetts to the Andover Newton Theological School for a solo exhibition in the Sarly Gallery (tentatively November through December). Andover Newton is our country's oldest graduate seminary, and, in fact, the nation's first graduate institution of any kind! I'm honored to enter somewhere at the intersection of this rich history and the school's forward looking thrust into the 21st century!

And in the meantime...

I will also be unveiling a commissioned installation for Trinity United Church in Warren, NJ, as the featured Artist of the Month for July.

To accompany the exhibition, there will be an Artist Talk, a Contemplative Service centered around my work, and a Forum on Art and Faith to discuss contemporary issues of art and faith!

As if that weren't enough excitement...

you can still register for my upcoming classes:

See my latest newsletter for a more detailed (and prettier) look at what's coming up!

Posted by Eric Valosin at 1:19 AM No comments: