Thanks so much to all of you who came to the opening of Untitled at the Walsh Gallery (up until the end of February - shameless plug!)

It was one of the most enjoyable openings I've been a part of, and I loved getting to meet some really excellent artists and gallery-goers!  If you'd like to see more about my piece, UnKnowledge you can trace your way through its development here, and then here.  But here, you'll find some pics from the opening! 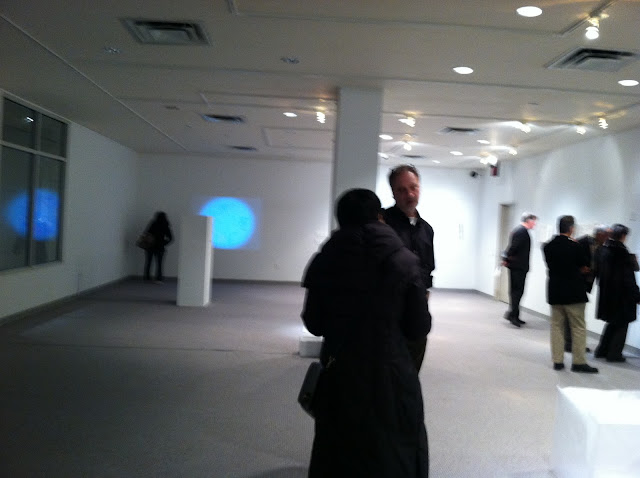 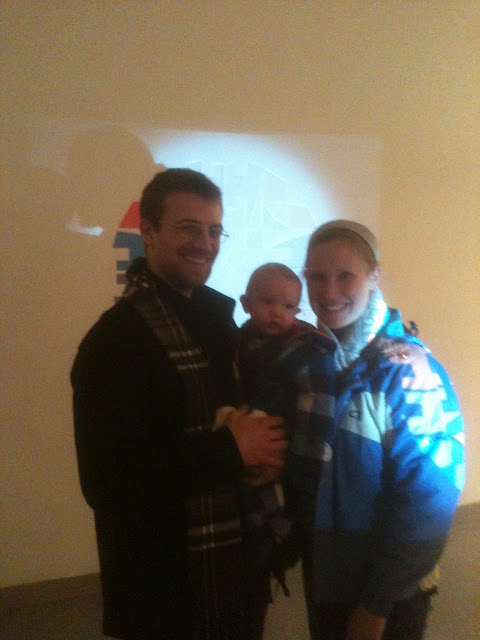 Posted by Eric Valosin at 5:00 PM No comments:

Would a Rose By Any Other Name Still Be Without Why?

20 points to anyone who got the references in that Shakespeare/Silesius mash up that points to one fairly fundamental problem:

I don't know what to call what I do.

"Postmodern Mysticism"... doesn't quite get at it.  It's concise, but utterly meaningless.  For one, "postmodern" means so many things that it means nothing terribly concrete.  Post- as in after: a continuation or furthering? Post-as in after: a chronological response? Post as in after: a negation, leaving behind the former in favor of something new?  Neoconservatism?  Poststructuralism?  The postmodernism of the 60s is quite a different thing from today's postmodernism; art's postmodernism from philosophy's; literature's from theology's. Of course, this all assumes the "post" means to even be post-something at all, rather than merely post-poning being pinned down in the first place!  One of my favorite quotes about postmodernism is that, "any age that refers to itself as post-anything clearly just doesn't know what it is."

I purposefully leave my coinage uncapitalized in reverence of John D. Caputo.  For to commit to such a proper noun would also be to commit an egregiously Metaphysical distinction.  But it's not a pure, classical Metaphysics I'm after - not the horrors of a correspondence model of truth - but a sort of metaphysics after Metaphysics (a meta-metaphysics?).  One filtered through the aerator of postmodern relational models of truth.  A metaphysics that Heidegger's inner mystic could be proud of.

Still lacks a sort of religious certainty.  Religious in the sense of Caputo's "religion without religion." Certainty, that is, in postmodernism's clandestine elopement with mysticism, officiated by the likes of Derrida's paradoxical différance, Heidegger's contemplative gelassenheit, Eckhart's detached abgeschiedenheit.

So far the term also lacks implications of Hal Foster's pseudo-Kantian "techno-sublime" which I love so much, the blend of cyberspace and Caputo's "unhinged" religion of the "impossible." How shall that get incorporated?  ...I much prefer the etymological exactitude of the prefix "techno-" to to the clumsily misappropriated "cyber-" (cyber[netic] from the Greek kiberneticos for "skilled in steering or governing;" the prefix is properly reserved for electronic control of the analogue root word, not the electronic nature of the thing itself.  Thus, since "cyberspace" is not real space controlled electronically per se but rather a new electronic space altogether, it's actually a misnomer.)  But can "techno" shrug off its rave-culture-disco-lighted connotations and retain some reference to its Heideggerian, Maussian, Foucaultian root, techne?

A lot here seems to do with roots - getting back to roots - radical (like a radish), if you will.  Radical both in the ordinary sense of being progressively subversive, and at the same time in this linguistic sense of being chidingly fundamental.  Moving beyond, by remaining rooted; digging up roots to learn how to grow.  Meta-radicalism?  The beyond that comes from before? That's thoroughly mystical at least in its paradox.

We are I think, at the very least, in a sort of radical meta-post-ism, searching our roots for that which will take us beyond the post-everything nomenclature.  Beyond the beyond by searching before.

I'm sure there are issues of hyphenation to be worked out, but that's a battle for another day.

radical metapostist mysticism?  We're getting somewhere, but without formal publication I doubt I won't just loose people to its obscurity.

Posted by Eric Valosin at 3:07 AM No comments:

Progress at the Walsh Gallery

Today I had what I hope to be a relative breakthrough for the site-specificity of my UnKnowledge project for the Walsh Gallery. It just so happens that the bulk of the light that interferes with my projection installation comes through the windows, reflected off of 5 or 6 large white columns outside. As the sun moves over the building the illuminated columns fall into shade one by one.  By that token, time can actually be measured 'digitally' in a way by the columns being 'on' or 'off.' Around 3pm (or 3 dark columns, if measuring time by the building) the light remains relatively stable inside until before sunset (or "blue-yellow time" as once put by color-specialist and lay-phenomenologist, artist Kristen Brandoff). 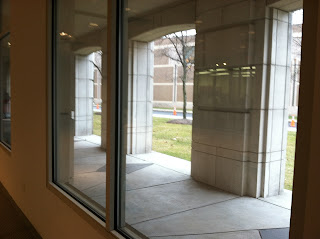 So, as of now I'm aiming for the piece to be constantly variable, its color shifting depending on the light throughout the day, until that moment when it all of a sudden it clicks together, grays out, and negates itself.It therefore is never stable and preformed until that one hour or so long window when the colors blend properly, only to then be rendered nearly invisible.

I'm also toying with creating a secondary calibration to be projected when its dark out so that the piece is at its optimal point during night events like the opening or the gallery walk.

We shall see. Exciting stuff! 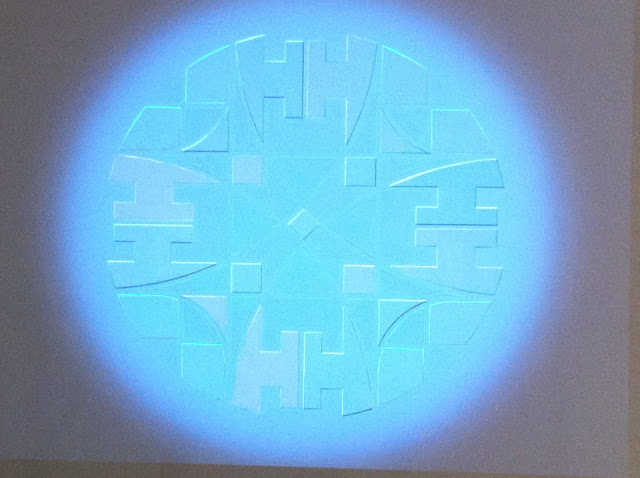 Posted by Eric Valosin at 10:11 PM No comments: 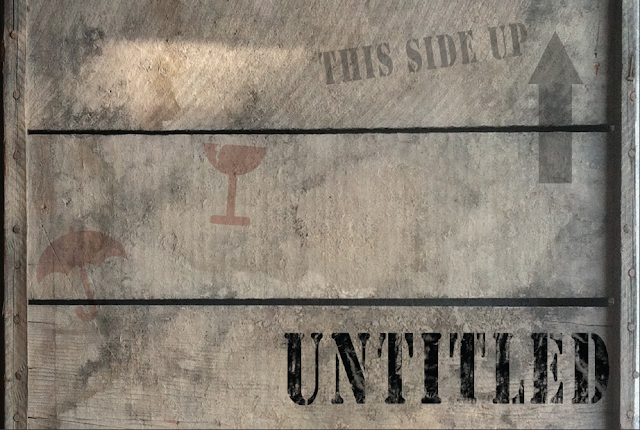 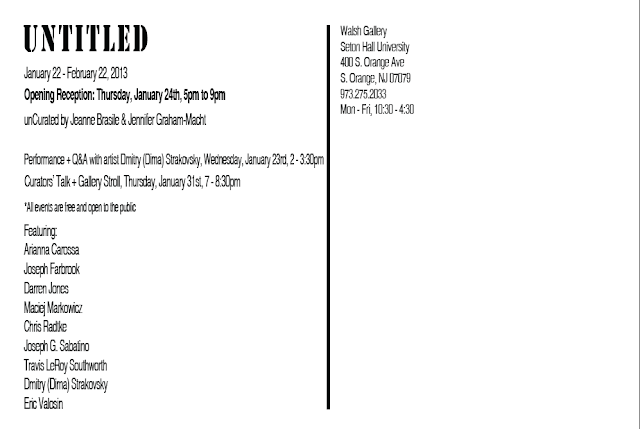 I've been invited to create a projection negation installation piece for this show, called "Untitled,"
curated by Jeanne Brasile and Jennifer Graham-Macht.  Essentially it's a show about nothing - rife with institutional critique and dematerialized art (for instance, Travis LeRoy Southworth's wallpaper of lint particles on a white wall...).  You link to the Press Release here!

If you've been following along on my blog you'll remember my recent work Hyalo, in which I painted a stained glass like form on the wall, then projected onto it in order to optically cancel out the painting.  You'll also remember that, for reasons explained in the post linked above, it turned into something completely different as it failed to be optically negated.

Well, I've been continuing my optics experiments and have figured out how to get the negation to work properly.

And for the record, I haven't yet figured out how to photograph this; in person the subtleties of color you see in the picture are actually non-existent.  For some reason the camera picks up those colors that our eye sees purely as neutral gray.

Here's the piece I'm working on for the show, which I'm titling UnKnowledge. 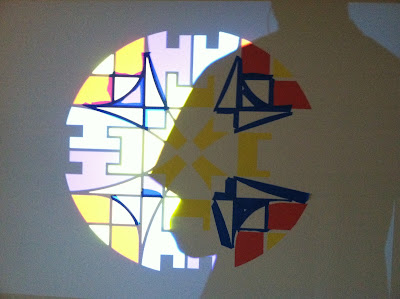 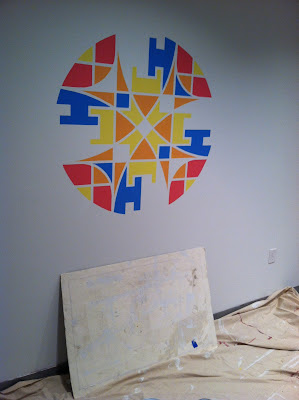 One of the challenges of the Walsh Gallery space is its wall of exterior windows, which creates very fluctuant lighting.  What looks perfectly negated at 1pm suddenly is tinted orange at 3pm and so on.  I'm toying with assigning it an optimal viewing time in which it all clicks into place optically, or trying to control the space a bit more for more predictable lighting.

Should be a very interesting show, and I hope you come to the opening on the 24th!
See you there!

Posted by Eric Valosin at 12:57 PM No comments: