Shelter From the Storm

I'm excited to announce that my submission for the Gimme Shelter exhibition at the Boatworks in Belmar was awarded 2nd Place out of the 70 or so submissions in the professional category (92 I think, including the student category).  You can read a bit about it on the Belmar Arts Council's Blog as well as in my older post.

The opening was quite enjoyable, with live Jazz, refreshments, and plenty of schmoozing, and I had a great time getting to know some of the people who help make the Belmar Arts Council run.
There were quite a bit of very outside-of-the-box approaches to the task, and some very impressive pieces that are worth checking out.  As I mentioned before, the show will be up until March 23rd at the Boatworks in Belmar, NJ.  Here's an installation shot of my piece. 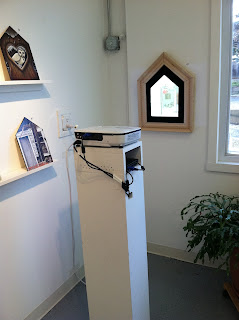 You can check out the actual video projected onto it on my website.


At the request of the gallery, I wrote up the following to potentially be used as a wall text for my piece:

Like a seemingly blank wooden board in a gallery, issues of affordable housing, or of poverty in general, can be all too easily overlooked.  Addressing such issues demands a certain intentionality of those in a position to do so.  Similarly, it is only after bearing with the seemingly untouched house shaped panel for a time that all the layers that contributed to its apparent “blankness” reveal themselves.  The process of creating this blankness - of painting the board through several layers and evolutions, ultimately back to its original state - is digitally projected onto the completed board as a sort of stop-motion video.  As the piece perpetually creates itself before the viewer, it explores the duality of shelter as both luxury and basic necessity as well as the struggle for an elusive ideal.

There were many foibles involved in the creation of this project (which spanned something like 80 hours of studio time).  In the hopes of educating posterity away from similar foibles, I'd like to share some things I've learned:

- wood does not magically grow after it's left the tree, but it does magically shrink to about 1/16" shorter than you wish it was.
- the carpentry adage is wrong: measuring twice actually leads you to cutting 4 times
- old table saws kick.  hard.
- Horizon Fabrics is not a fabric store, and while they don't lock their doors, they do set their alarm
- No matter how judiciously you select your wood, a pedestal will be better made from that MDF board you didn't buy.  You're wood however will make a superb cutting board.
- Final Cut will do magical things, but not the things you need it to do.
- Netbooks do not, under any circumstances, play nicely
- There is not a program in existence that adequately reads .mov files on a netbook
- Even Apple Support will take 3 tries in suggesting a program that can convert .mov to .wmv without losing quality for under $500
- the internet lies, but YouTube can solve just about anything.
- turning off a netbook while taking 30 minutes to automatically install update 2 of 11 can corrupt the operating system
- 2000 lumens is NOT bright enough
- galleries typically don't know what to do with a projection piece
- the bolt size for a standard tripod screw is 1/4."  Projector bases are not standard.
- "machine screw" is a technical term for "bolt of the desired thinness but measured in an arbitrary system you can't translate to a ruler and therefore will take at least 3 trips to Home Depot to find the right one."
- wood is heavy and Montclair's Car Park Diem is very far from Finley studios
- if you have a deadline, expect the most off-the-wall complication to surface for the first time the morning of that deadline.
- wherever you have to go for an opening, your business cards will be an hour in the opposite direction.
- recounting stressful experiences while writing a blog entry can apparently lead to a bloody nose...