"Everything happens [to get confusing] according to the Logos"

I'm trying to decide where to go with my next big project.  In one ear I have people whispering enlightenment into the filmic depth of my still painting.  In the other ear I have people whispering a very different sort of enlightenment into the form of my video pieces.  In the other ear (yes I have 3 ears) I have  years of church/ministry leadership experience telling me how people don't experience the divine, and how that correlates all too much with many trends in mainstream art.  But here's where my brain is at the moment:

First, as Robin Williams (the young and brilliant painter, not the actor) recently pointed out to me in a studio visit, there's admittedly a certain disconnect in the physical presentation of my projected white canvases and the realization that everything you see is actually present on the canvas you're looking at.  After a brief explanation of process though, the viewer has an "ahah" moment.  The task now is to somehow build that ahah moment into the piece so that it reveals itself, especially since, as Robin noted, the notion of spirituality is so much about that revelatory "ahah" moment.  How to do that is another story...

Second, as Shahzia Sikander's recent show in the Sikkema Jenkins Gallery in Chelsea revealed to me, there's yet another disconnect in the link between my still painting and my videos.  When you look at one of hers, you feel as if you've seen both, yet they are fundamentally unique at the same time.  Somehow the styles and content of the two bodies have to dialogue with each other a bit more.  How to do that is another story...

Third, I've been revisiting this idea of the Greek Logos after having shown my White Canvas: Logos at my open studio and discussing it with Iain Kerr.  I'm currently reading Martin Heidegger and Eugene Fink's Heraclitus Seminar, and their discussion of Heraclitus' notion that "Lightning steers the universe," in conjunction with the fragment,  "Everything happens according to the [Logos]," (linking the usage of the word panta, for everything and universe).  To make an extreme summation, they have built the argument that these translations are essentially terribly off, and that for one, "steering" is actually more accurately "a movement of bringing-forth-to-appearance," as lightning illuminates a landscape and causes it to exist to the eye of the beholder.

This gives me the sense that Logos has two distinct stances in the manner of creation.  In the Biblical use we can think of Logos as the "word," which was with God in the beginning as God literally spoke things into existence, and thus it speaks of the generative act of creation itself.  However, Logos as a divine guiding reason behind the universe, as Heraclitus would have seen it, seems to have less to do with creation as it does revelation.  So what is that "ahah" moment in regards to the Logos?  Well, if logos reveals, then that act of revelation is the transformation from unknowing to knowing (of making privy to the very undercurrent that guides the universe and had given it it's origins).  In a Christian sense, this would be the role of the Holy Spirit in revealing the Father.  How does one reach this ahah moment? The epiphany comes at the experience of this divinity, in which, to borrow from Spanish, knowing goes from supiendo to conociendo and head knowledge becomes experiential truth.  (Interestingly, this notion of epiphany of course also conjures up the wise men and the annunciation of the Son...).  If I've lost you, this diagram of my thought process should clear things up.  Or make it worse.  Who am I kidding, it will definitely make it worse.  If it helps, I started with the idea of religious triptychs on the left and then moved to questions in the middle, then down the page, settling then on the top of the page to reiterate my realizations. 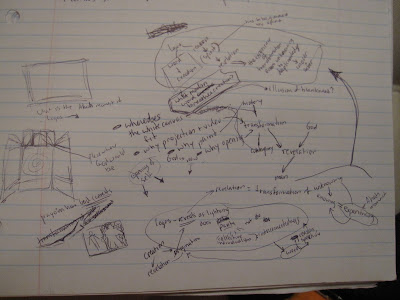 If I'm asking my art to reveal as Logos reveals, I now ask myself how true divine experience can be entered into.  To my knowledge, the most successful way to allow people to enter into a space of true heartfelt experience is to allow worship to be self-guided and participatory.  I'm reminded of a worship service the youth group I led ran a few years back, in which they provided the tools needed to simply let congregants connect with God in whatever way seemed best for them, through art, through dance, writing, singing, prayer, reading, moving, listening, speaking, engaging others, literally whatever.

Well, the good news is that this notion of revelatory transformation is in very tight dialogue with my process of layered projection, and it seems just a few tweaks away from true integrity.  Where I'm stuck however, is in the realization that I'm essentially asking my art to cause people to experience God upon seeing it (pshh, no biggie, right? ...) and that I get the sense it somehow needs to be more participatory and experiential in order to do that.

I'm pulling for Heidegger to suddenly send one of those Greek lightning bolts to illuminate my studio practice somewhere in the next 80 pages!
Posted by Eric Valosin at 9:50 PM